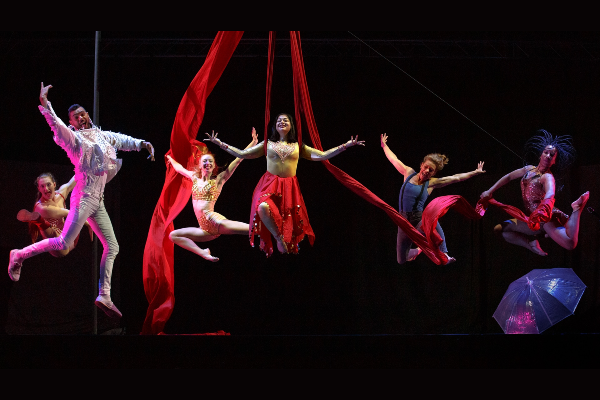 If you want a look at the daring young man on the flying trapeze, a magic bed that takes off, or the enigmatic mad dog on the moors, then theatres in Brighton, Eastbourne and Worthing can supply the goods. Add a Trans film night, an all-women’s cabaret night and some Russian ballet and the menu’s still not complete.

On 21 October there wil be a free screening of Transfinite by Neelu Bhuman, comprising  seven stand-alone short stories where supernatural Trans and Queer people from various cultures use their super powers to protect, love, teach, fight and thrive – blurring the lines between the magical and the real in the Sci-fi genre, courtesy of the Otherness Archive.

On 22 October there’s the return of the Cocoa Butter Club, giving cabaret artists of Colour a showcase to be seen. It features soul, blues, jazz, burlesque, side-show and voguing. Tickets for all 3 events at pride-tickets.org

The gem of a theatre, the Devonshire Park in Eastbourne re-opens with a great season which includes the world premiere of the blockbuster Bedknobs and Broomsticks The Musical. Running from 13-17 October, it features songs by the legendary Sherman Brothers and new music and lyrics by Neil Bartram and a book by Brian Hill. Three war-time child evacuees meet a trainee witch and search for a secret spell to defeat the enemy using a flying bed. It stars Dianne Pilkington and Charles Brunton.

Other shows include: The London Philharmonic Orchestra (10 October), The Hound of the Baskervilles- which combines farce, theatrical invention and wonderful comic performances  – it’s Sherlock as you’v never seen him before ( 26-30 October).

Fairytale of New York is a compilation of all your favourite Christmas songs (10 November). Other shows include: comedians Jack Dee and  Rhod Gilbert. Tickets – eastbournetheatres.co.uk

Mr Wickham is not only onstage at Eastbourne; he also appears in Worthing’s new season on 21/22 October. Theatre Re presents Birth on 8/9 October. It explores the bond between three generations of women, their shared loss and the strength they discover in each other.

Red Fox Theatre present Catch Of the Day (30 October), set in a a West of Ireland pub, it’s a mash-up of live music, comedy and theatre. On 4, 5 and 6 November you can be scared by The Strange Case of Dr Jekyll and Mr Hyde, a thrilling adaptation of Robert Louis Stevenson’s dark psychological fantasy.

Jacksons Lane and Lost In Translation present three variations of Luminosa, presenting the cream of British and international circus acts on 2 and 3 October.

Ian Waite and Vincent Simone , ballroom stars from Strictly present dance, comedy and song (30 September). And finally Lost Dog Dance present a new take on the lovers’ tale of Romeo and Juliet. What if they’d survived, grown up and lived sort of happily ever after? (12 November).  Tickets for Worthing shows at wtam.uk