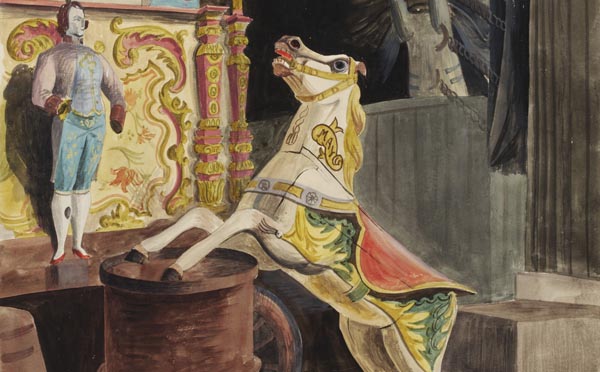 The excitement is in the little noticed buildings that have been looked at with an unprejudiced eye and recorded with a sensibility that shows. John Piper, 1944.

Towner presents Recording Britain, an exhibition of nearly fifty watercolour paintings of the changing landscape of Britain during the Second World War.

Set up by Sir Kenneth Clark at the outbreak of war in 1939, Recording Britain was a scheme intended to boost national morale by celebrating the country’s natural beauty and architectural heritage, as well as a memorial to the war effort.

Selected from a collection of 1500 paintings, now held by the Victoria and Albert Museum, the show features artists such as John Piper, Kenneth Rowntree and Barbara Jones, and emerging artists of the time. They were commissioned to paint ‘places and buildings of characteristic national interest’, and to document rural and urban environments and precious buildings under threat from bombs and the effects of ‘progress’ and development. Clark considered Recording Britain to be an extension of the Official War Art scheme.

Spanning the length and breadth of the country from Yorkshire to Cornwall, Caernarvonshire to Norfolk, Recording Britain documents the rich diversity of buildings in England and Wales in the late 1930s and early 1940s; from old cottages, farms, pubs, hospitals and churches to naval relics, stables, stately homes, condemned domestic dwellings, industrial canals, mills, mines and quarries and a temperance hall.

Clark was more interested in paintings that gave a sense of the continuity of the English town or village rather than of buildings of outstanding architectural merit. He also wanted paintings of parish churches that ‘were in a bad state of repair and will either fall down or be ruined by restoration’, and country houses and parks that might be abandoned after the war.

In addition to works from the original collection, Recording Britain features contemporary paintings and photographs by Conrad Atkinson, Keith Arnatt, Jeremy Deller and Alan Kane, Richard Long, David Nash, Laura Oldfield Ford, Jem Southam and others. Though more modern responses to recording location, the artists are similarly seeking the unfamiliar and unexpected remains of the past, the transient and threatened.

Recording Britain follows other exhibitions at Towner such as The Lyons Teashops Lithographs: Art in a Time of Austerity, and Designing the Everyday: from Bloomsbury and Ravilious to the present day which explored the role of artists and art during periods of major political and economic upheaval in twentieth century Britain.

Recording Britain is organised by the Victoria and Albert Museum, London.