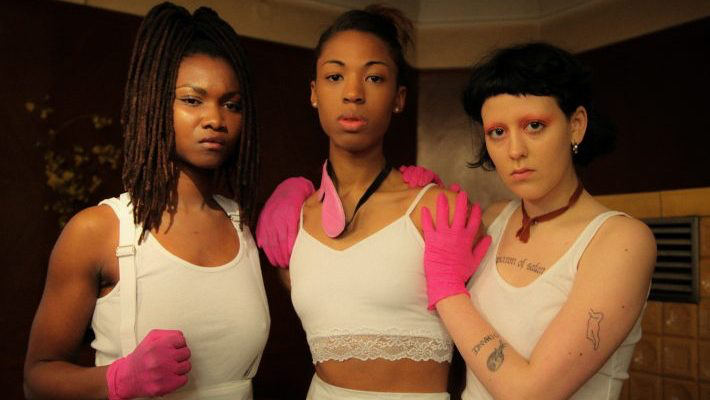 Cinecity, the Brighton film festival, is showing a number of LGBT-themed films tonight and over the weekend.

The Misandrists (pictured) is the latest provocation from underground queer film legend Bruce LaBruce (The Raspberry Reich, Hustler White, Gerontophilia). It’s the story of a dissident lesbian feminist cult hiding out in the heart of “Germwomany”. The group, which calls itself the Female Liberation Army, is led by Big Mother, an influential leader who publicly pretends to be the headmistress of a convent school for abused and delinquent girls. The FLA indoctrinates its young recruits to take up the struggle of freeing all female people through a mix of revolutionary porn-making, songs about taking down the patriarchy, and even a sneaky dancing nun. But does the FLA’s brand of radical feminism hide some darker and more exclusionary beliefs? Thursday 23 at Duke’s at the Komedia.

The Untold Tales of Armistead Maupin. A fond portrait of Tales of the City author Armistead Maupin, sure to delight diehard fans and newcomers alike. Jennifer M. Kroot’s affectionate tribute traces Maupin’s life from his conservative boyhood and youthful flirtation with Republican politics to his current status as beloved gay icon, raconteur, and advocate of sexual liberation. Tales of the City chronicled the daily adventures, love affairs and lives of a group of fictional friends living in San Francisco. It began life as a newspaper serial, with regular installments appearing in the San Francisco Chronicle. Kroot takes this as inspiration, structuring her film as a series of themed vignettes, incorporating talking heads, archive footage, and clips from TV and film. This film, winner of the Documentary Spotlight prize in this year’s SXSW Audience Awards, is sure to have audiences rushing back to the shelves to pick up his books. Friday 24th at Duke’s at the Komedia.

Love, Cecil is a warm but unsentimental portrait of Cecil Beaton and his work, offering the viewer an honest account of a larger-than-life and occasionally controversial character. A photographer for the Royal Family and three-time Academy Award winner – for costume design and art direction – Beaton’s publicly celebrated works are placed in intriguing context by his private frustrations and lifelong search for personal happiness. Having brought the biographical documentary Peggy Guggenheim: Art Addict (2015) to the big screen, Lisa Immordino Vreeland turns her inquisitive attentions to the life and work of Beaton. Restless and multi-talented, he was a highly-regarded figure in the art world in a career spanning almost sixty years that encompassed photography, writing and theatre, film and costume design. Saturday 25 at Duke of York’s Picturehouse.