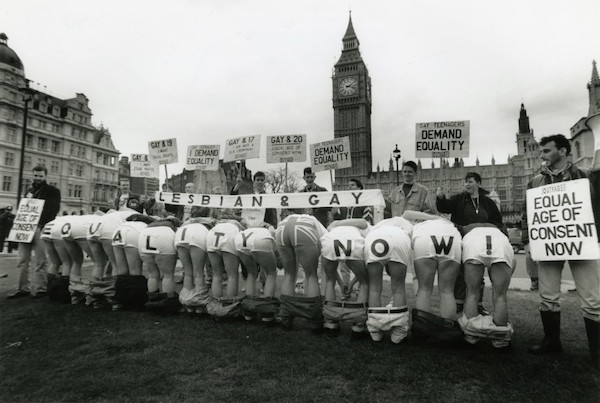 Bishopsgate Institute will be staging a take-over of The Curve at the Barbican from February 28 – March 21 with an installation of objects, ephemera and media highlighting 40 moments and stories in London’s LGBTQ+ history.

From placards carried at demonstrations to never-seen-before photographs documenting London’s gay scene over the past 40 years, the items drawn from Bishopsgate Institute’s extensive Special Collections and Archives present the stories of individuals, collectives and organisations who fought for social, political and cultural change.

The free exhibition, open for a limited three-week run, will feature a focus on protest including original OutRage! protest banners used in their campaign against Section 28 and a truncheon seized at a demonstration by Mark Ashton, the founder of Lesbians and Gays Support the Miners. This will be complemented by personal diaries, photographs, and treasured objects, many of which will be seen for the first time on public display, helping tell the story of LGBTQ+ life in London from 1982 to the present day.

The take-over of The Curve forms part of the Barbican’s 40th birthday celebrations and launches the Barbican Archive’s new public programme strand, The Edge of the Centre, exploring the deep histories, collections, places, people and practices neighbouring the Barbican Estate. More info about this new events series will be released soon.

Will Gompertz, Artistic Director of the Barbican, said: “We’re thrilled to be welcoming Bishopsgate Institute into the Barbican for this take-over of The Curve. As the Barbican marks 40 years it is important to reflect on how London has changed and bring some of the missing stories and narratives to the centre.

“This is just the start of a new stream of work exploring the cultural histories and perspectives of organisations and individuals connected to the Barbican Centre and its neighbourhood.”

To complement the exhibition in The Curve, Barbican Cinema will present a rare screening of the landmark gay sex ed documentary, The Gay Man’s Guide to Safer Sex (UK, 1992, dir David Lewis) on March 1 followed by a ScreenTalk with producer Tony Carne and film curator Selina Robinson, who will discuss the film’s legacy.

The installation will also be accompanied by a programme of informal talks and conversations hosted inside the gallery by the individuals and organisations whose stories are on display. Participants will include E-J Scott of the Museum of Transology; Tash Walker of LGBTQ+ phone helpline Switchboard; Sue Sanders of the International Festival of Lesbian, Gay, Bisexual & Trans History Outing the Past; and LGBTQ+ activists Dan Glass and Faizan of Imaan.

Moreover, the Barbican’s Creative Learning team will organise The Archive is Permanently Under Construction, a free programme running from February 22 – March 22 and open to young creatives between the ages of 18 and 25 interested in critically engaging with archives, collections and LGBTQ+ themes. The project will culminate with a Young Barbican Night on  March 17, with the group creating a series of original creative responses to the exhibition in The Curve.