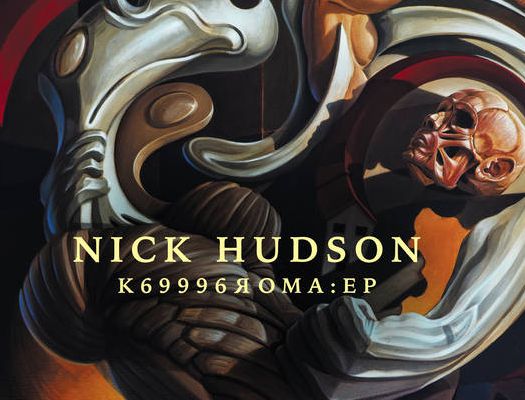 Nick Hudson is a Brighton based solo artist and also frontman of The Academy of Sun. His latest solo release pays homage to the iconic filmmaker Pier Paolo Pasolini, who was murdered in Italy in 1975. The case remains unsolved to this day.

As well as making movies, Pasolini was a Marxist, a poet and he was also openly gay. He was, to put it mildly, a controversial figure. His films have never gone out of fashion – he was one of cinema’s greatest auteurs. Naturally, the mystery surrounding his death has invited many theories, some more conspiratorial than others. It’s an irresistible story.

Nick Hudson has long been drawn to Pasolini’s work. He explores his life and sudden demise in extensive detail in his new EP ‘K69996ROMA:EP’ (no, that’s not Elon Musk’s new baby). The lead single is ‘The Ballad Of K69996 Roma’. It’s a very dramatic dramatic song with impeccable orchestration.

‘The Ballad Of K69996 Roma’ transposes a conscience upon the slick Alfa Romeo car that was owned by and weaponised in the 1975 murder of queer Marxist filmmaker, poet and essayist Pier Paolo Pasolini. This is echoed in the astonishing video by Brighton-based filmmaker Adrian Goycoolea.

According to Nick, “While cinema has always been pivotal to my work, it’s never been stronger than here, with references to Alain Delon, French cine-essayist Chris Marker, and the aforementioned Pier Paolo Pasolini, scattered throughout.”

If you have an interest is post-war bohemia and the esoteric, then this is a collection of songs you won’t want to miss.

The EP consists of 8 diverse tracks, including ‘Asymmetric: A Forgery’, a track that was originally composed and recorded for ‘Font Of Human Fractures, but was omitted due to running time restrictions on the vinyl edition. ‘The Florist’, co-written with Kianna Blue (The Academy of Sun), proposes a kind of metaphysical tabula rasa, as the protagonist self-immolates in a flower shop, and ascends.

“Channeling Pasolini’s communism, and the contradictions within his own ‘brand’ of it – alongside my own contemporarily-heightened anxieties and allegiances – the political angles are sharper on this release than on others. As such it felt right to include my interpretation of Robert Wyatt’s beautiful ‘Amber And The Ambergrines’ in the set,” says Nick Hudson.

Nick’s latest project would make for a great musical – if anyone wants to fund it then do get in touch. This music may be too much for Radio 1 but fans of Nick Cave, Bjork and Tori Amos will find a lot to appreciate.

‘K69996ROMA:EP’ will be released digitally and as a hyper-limited edition 4-panel CD digipak of 50 copies, 25 of which will be presented in an ACAB-silkscreened metallic gold envelope, with a bonus track in the form of a score booklet, printed on Nepalese floral paper and featuring an original miniature artwork by Nick Hudson.

This and Hudson’s other music and artwork can be ordered here.