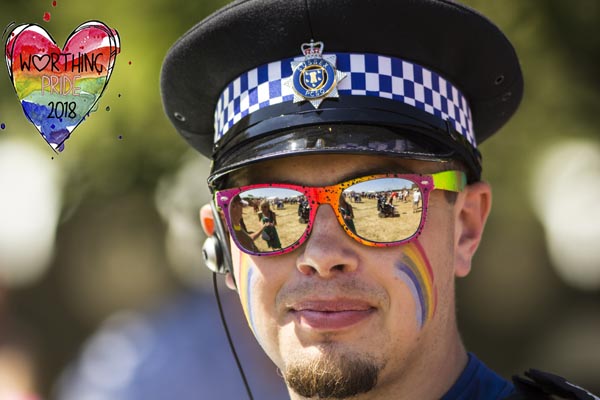 Each one was chosen and voted for by the public, with Worthing Pride achieving a “landslide” victory, according to a spokesperson at the ceremony.

The categories, such as Best Independent Retailer, Restaurant and Cafe, Arts and Crafts and Community Projects, saw Worthing Pride nominated alongside popular events like the Worthing Festival of Light.

Sponsors of Best Event category, local community magazine, Here and Now, said; “This is such a well-deserved award, not only to the team who organised Worthing Pride, but for the people of our town that supported and embraced the event, celebrating diversity. Its changed the perception of our town forever.”

In July 2018, sell-out crowds made the first Worthing Pride a huge success for the town. 700 people took part in the parade while thousands of spectators lined the streets to witness the colourful spectacle.

People from across all communities came together, regardless of sexuality, gender or age, for what was dubbed as “the biggest tea party and fete” ever created! The Worthing Pride team are delighted with that feedback.

Josie Kelly, founder of Worthing Pride, said; “We were overwhelmed with positive feedback from our first Pride. One of many guests wrote to say that he’d grown up a gay man in the town during the 80’s and 90’s and moved to London. He came back to Worthing for Pride and never thought that one day he’d see all couples, gay and straight, holding hands, being affectionate, alongside families, and no one caring. He said that for the first time he felt proud to be a gay man from Worthing. I am immensely proud.”

Worthing Pride returns on Saturday, July 13, with all proceeds going to local charity, The Hope Charity Project who connect families with children who have mental health problems.

The flamboyant Parade on the Prom will start at noon, followed by the Main Event at Beach House Grounds from 1pm till 10pm, hosted by Spice and featuring drag legends such as Dave Lynn and Davina Sparkle, plus Britain’s Got Talent winner, the ex-Collabro vocalist, Richard Hadfield.

Tickets will be on sale in March, along with more Pride event and Parade registration information.

Worthing Pride, will be sponsored by local independent bar restaurants, the Cow Shed and Cow & Oak, and Equiniti,