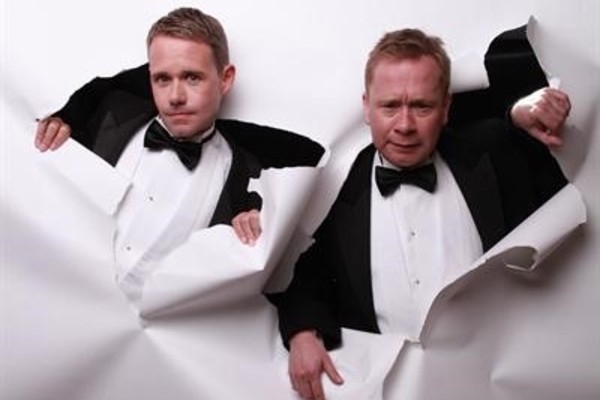 An interesting departure for the Brighton Philharmonic Orchestra – a concert without the orchestra! They’ve already taken steps in that direction this season, with a concert performed by just their brass section, but this was a step further, to bring back Worbey & Farrell, the piano duo who performed with the orchestra back in 2018 to great acclaim. Knowing they’ve been struggling somewhat financially, it’s clear that they’ve had to think outside the box a little. On this occasion, they definitely pulled off a deft move – something different, that no doubt brought in a much needed new audience, but that in no way could have left the BPO regulars feeling short changed.

Stephen Worbey and Kevin Farrell met at the Royal College of Music, and have established a highly successful career playing together over many years now – today’s concert also marked Kevin’s 50th birthday. They pull off the tricky challenge of combining humour and classical music virtuosity, the key being that they excel at both. It is a tricky mix – often classical music comedy is either just not very funny, or it relies so much on in-jokes and knowledge that it’s exclusive and smugly self-congratulatory. Neither could be said about Worbey & Farrell in any way. Their onstage patter comes across as natural, whilst their anecdotes and asides never stray too far from the music itself. And they are genuinely funny, with well-constructed gags and jokes throughout.

They of course owe a debt to the likes of Victor Borge, Liberace and even Les Dawson – and these all get affection name checks. We were even treated to a smattering of Dawson’s ‘wrong notes’ playing, as well as their own arrangement of Liberace’s classic showpiece, Boogie Woogie. Here they brought in an element of audience participation, and it was noticeable that when it was the turn of the under 20s to shout out, their ‘hey’ was impressively loud, the audience containing a refreshingly high percentage of children and younger people.

Having announced their goal, to ‘cheer up piano recitals’, early proceedings included their impressive rendition of Khachaturian’s weighty Masquerade Waltz (which they jokingly said was on their new ‘Meditation’ album), and a delicately romantic arrangement of Ennio Morricone’s Chi Mai (which listeners of a certain age will remember as the theme tune to TVs The Life and Times of Lloyd George). After this, they switched on a camera positioned to pick up the keyboard, and more importantly, their hands, projected onto a large screen behind them. This remained for the rest of the concert, and made for a mesmerising insight into the technical complication of their arrangements.

They share the one piano stool, and play with their arms mostly interlinked – so not the straightforward bass/treble split of standard four hands piano duets. As they explained, and deftly illustrated with some deconstructed explanation in their arrangement of John Williams’ Superman love theme and Jurassic Park, they aim to replicate as far as possible the full orchestral colours of the pieces they arrange. So Farrell often plays percussively at the bass of the keyboard, whilst brass and bassoon textures are brought out in the baritonal ranges. Strings feature in the mid-range, and the bright woodwind at the top end. Frequently, you could see their hands intertwined as they pass the melody lines around the ‘orchestra’.

And they demonstrated their true musical expertise, both in terms of virtuosity and understanding of orchestration and arranging in the two ‘big’ pieces of their programme – their own arrangements of Addinsell’s Warsaw Concerto, and Gershwin’s Rhapsody in Blue. In both, their ability to combine the lush orchestral textures and detail of instrumentation with the virtuosity of the piano ‘solo’ part is astonishing. Their choice of other main work for the second half of the concert, Prokofiev’s Peter and the Wolf was also a masterstroke. Again, they could show off their skill in replicating orchestral colour, as well as adding their own humorous take on the tale (including a bizarrely northern duck) – and spoiler alert, they add their own happy ending!

With a few other gems thrown in for measure – Albeniz’s Asturias (Leyenda), complete with Kevin dampening the strings in the piano to replicate a guitar, as well as hammering chords from a standing position to great effect, and Piazzolla’s Libertango equally percussive – this was a hugely entertaining and action-packed programme from two highly consummate musicians as well as very funny showmen.

Check out their website here for all up and coming concerts or performances.