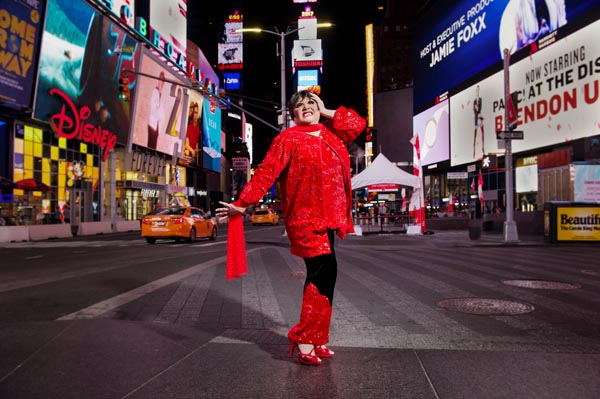 Trevor Ashley brings his latest offering Liza’s Back (is broken) to the Spiegeltent at the Uderbelly Festival on the South Bank and what a wonderful treat it is.

Few performers can hold an audience in the palm of their hands when singing live at the best of times.  But, that is exactly what Trevor Ashley does, singing full-out for one and a half hours, blasting out all the big high notes on what must have been the wettest and most miserable night I have spent at a theatre in many moons. His performance was old school, glamorous and captivating.

The premise of the evening is to hear Liza sing and talk about the Broadway shows she was never cast in, linked together by very funny patter, and in some cases the rewriting of the some of the plots. She is never bitter, but I will never be able to watch Sound of Music again without thinking of the von Trapp children being dead!

At times running very close to the knuckle, but never offensive, Ashley weaved his way in and out of all the great Broadway shows with new and unusual arrangements of many classic broadway numbers including Send in the clowns, I have confidence, With one look, Broadway baby, Cabaret, New York, New York and an arrangement of Memory that put a completely new spin on the classic, Lloyd Webber number.

When I think about the great female vocal impersonators, I think first of the great Jim Bailey. With his meticulous attention to detail and exaggerated top comic timing, Ashley holds his own in Jim’s Bailey’s company. He is uniquely talented, uniquely musical and a uniquely funny performer.

My only small gripes is that while the mood lighting was very effective the production would have benefitted from having a follow spot.

Special mention for the first class seven piece band especially the woman playing sax and doubling clarinet and flute. Her sound was marvellous and her playing really added to my enjoyment of the evening.

In the ‘old days’ the appearance of an artist of the calibre of Ashley in London would bring the ‘gay glitterati’ out. I hope they go along in their droves, despite the angle deep mud and see what a consumate performer this Australia artist really is.

Liza’s Back (is broken) play until Sunday, July 2 at the Spiegeltent at the Uderbelly Festival next to the Royal Festival Hall on the South Bank.