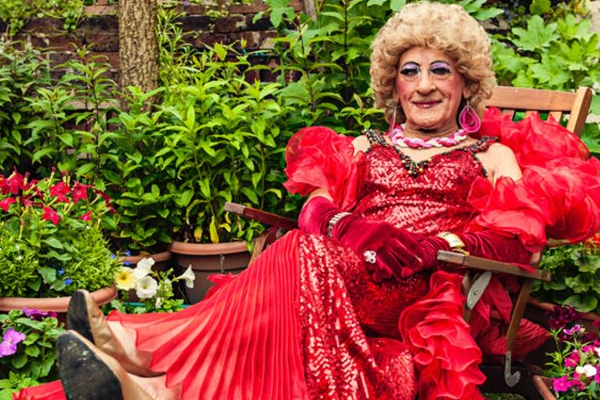 Scene Magazine wishes National Treasure Maisie Trollette a very happy 88th Birthday today, with a peek back at an interview given to Brian Butler.

David Raven, aka Maisie Trollette, talks to Brian Butler about being a master grocer, teenage innocence, breaking into the entertainment business and the many stars he has known and worked with in his 60 years in the drag business.

It’s difficult to think of another drag artiste who can in the space of an hour or so chatting in his garden flat in Kemptown, Brighton, get ballet star Rudolf Nureyev, Princesses Margaret and Diana, Barbara Windsor, Diana Dors, Petula Clarke and drag royalty Danny La Rue into the same summary of his life as a performer

And this is not name-dropping for the sake of it. Being in David Raven’s company for even a short while is a window on the world of show business going back to the 60s

David, who turned 88 in August, continues his career – albeit at a more sedentary relaxed pace .

Fitting therefore that a film is currently reaching its final production stages which charts his life as the oldest drag queen in the UK. But don’t say ‘queen’ to David – he prefers ‘artiste’.

When you sit and listen, you rapidly realise that you’re in the presence of a legend, though it’s not how he sees himself nor how he behaves.

“At school I was not a performer of any kind,” he says. His family were grocers and publicans, first in Ipswich then Suffolk, and he made rapid progress in the same trade – becoming a manager of the Co-op at 21.

“I had no gay self-awareness in those days. It wasn’t really talked about. There was gossip and stories about why were those 2 guys always together and that sort of thing but I didn’t catch on to what it was really about.”

Having sung a few times in the family-run pub, he ended up in a panto in a local holiday camp and that sowed the seeds for what was to come a few years later. Older men took the young David under their arm and he saw the first glimpses of an unspoken gay lifestyle.

“I had always been keen on the theatre – my mother took me every Wednesday to the Theatre Royal in Norwich, so when I did panto I got hooked on the theatricality of it all.”

Winning a jive dance competition on Anglia TV seems to have sealed his fate, and he went off to London with his lifelong friend Brenda. At Liptons shop in Victoria his other talent was soon spotted – “I could bone a side of bacon in a very quick time, and I soon found myself working in the food hall of Selfridges department store.”

He stayed for 12 years , the last 4 years of which he had an alter ego in the evenings and weekends – being Maisie Trollette – with friend Jimmy Court as his double act partner Jimmy Trollette.

In the 1960’s David met his life partner, banker Don Coull, and it was Don who suggested David should glam up a bit. David said no, but Don said they looked like a pair of trolls – the fictional mountain creatures. David altered the word – “ette” being a suffix that means young and the Trollettes were born.

The theatrical side of entertaining had always interested him – and through John Nathan-Turner, producer of the Doctor Who TV series he had landed roles in touring productions of both The Boys in the Band and One Flew Over the Cuckoo’s Nest.

When Jimmy and Maisie won a talent contest at the Black Cap pub in Camden, their act rapidly developed. “We were singing live and no-one else was. We had a pianist and no-one else did. And we had lots of audience participation – that was our secret.”

David was the ideas man, thinking up new gags and sketches, putting Jimmy in difficult situations for their comics value. Their audiences contained ballet star Nureyev, Princesses Margaret and later Princess Diana and many others. The stars were known to be in the audience but they were ignored – “it was a very relaxed environment – this was their night off to let their hair down,” says David.

The couple were favourites at the Union Tavern in London “If you didn’t go to the Tavern, you weren’t on the gay scene.” says David.

On one memorable night international diva Zsa Zsa Gabor who was starring at the London Palladium famously swapped dresses with Maisie, and on went the drag artiste in the Hollywood star’s frock.

Pantos with actresses Linda Baron and Wendy Craig followed. And the drag continued, “Woe betide anyone who stood up in the audience to go to the toilet. I would follow them and tell them nobody walks out when I’m singing .”

Asked if he has any advice to his younger self, he can’t really think of anything except he wished he’d been encouraged to do more stage musicals and also been able to be more open about his sexuality.

In more than 20 years in Brighton has much changed I asked him. “Well we got through the heartache of HIV/Aids – youngsters don’t think a lot about that nowadays. They don’t take precautions and stay safe. There’s no fear about HIV and they don’t see it as a death threat. Of course it is. I lost more than 20 friends to it.”

“On the plus side the sensitivity of people has changed, it’s a more accepting and open world now.”

He appeared at the first Brighton Pride – has much changed? “They’ve got electricity now” he jokes.

What gets him up in the morning? “Years of running a guesthouse meant I had to get up early and I still do.

What keeps him going at 86? “Still being here” he replies.

Let’s hope that’s true for some time to come so we can all cherish this national treasure.