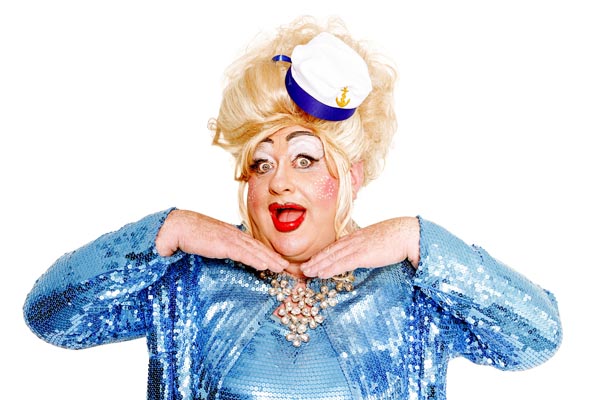 LP Creatives, the team behind the sell-out pantomime at the Ropetackle Arts Centre in Shoreham support the charity Cancer is a Drag with its new charity song release Christmas Time With You.

Cancer is a Drag is a registered charity (Reg. No. 1160129) who’s main aim is to provide financial and wellbeing support to people and their families living with cancer.

Set up by its Founder, Alan Bugg, whilst going through treatment on his own cancer journey, the charity was born out of first-hand experience of the difficulties people living with the disease face that are often overlooked.

Tom Beard, Producer of the show Dick Whittington and his Cat in Shoreham along with the shows Director Quintin Young and David Pollikett aka Davina Sparkle (pictures included) who will be playing Dame Sarah the Cook, decided that the song would make a great addition to the pantomime.

Tom says: “We will be making the song a part of the show at the Ropetackle and also holding a collection at the end of each performance – hopefully the audience will appreciate what we are trying to do and we can raise some much-needed funds for this worthy cause. Christmas is a time for thinking of others and giving something back – and what better time to spread some Christmas cheer than during a pantomime?”

“David and I are great supporters of the charity” Quintin adds “it’s ideal to combine this association and bring this great song in to this year’s Panto and we’re thrilled that Tony has given permission for us to include the song in this years pantomime and share this great song with the folks at Shoreham this season!”

Last year Tony wrote a track for Brighton based Miss Jason, which raised substancial funds for them

Tony says: “This year, I am delighted to be involved with another charity, Cancer Is A Drag (CIAD) and we are looking to raise some more money for this charity who work so hard to raise funds for people who are going through difficult times, and are offered support with assistance,

“Maybe to help pay for travel expense to hospital for treatment, just little things that are so important when you don’t feel like doing anything except concentrating on getting better.

“So I was so happy to join forces with Alan Bugg and his wonderful team of workers, to get this Christmas project off the ground in time for Christmas this year. The song is called, Christmas Time With You it written and composed by myself, and we are hoping that it will be a great success for the charity.”

Christmas Time With You will be released on November 6, 2017.

The charity is run voluntarily by the goodwill of the founder and its Trustees – there are no salary costs. The only costs involved are expenses incurred in organising, setting up and carrying out fundraising events and the purchase of items needed for these events or to raise more funds and promote the charity such as t-shirts, pin-badges, flyers, banners and the like.

Grants up to £500 are available, depending on the circumstance and need of the beneficiary or their family. Money can go towards paying bills, mortgage, rent, for food, special clothing, travel to and from treatment, household items needed, a treat away or even towards a funeral.

Cancer is a Drag stay with their beneficiaries on their cancer journey and offer more than just a one-off grant by providing top-ups along the way. The whole process is very ‘hands-on’ and is completed in quite a relatively short period of time so as to cause the person involved the least stress possible.

To make a donation to Cancer is a drag or for information on how to apply for a grant, click here:

If you would like to volunteer in any way or can help with sponsorship email the Founder and Trustees at info@cancerisadrag.org