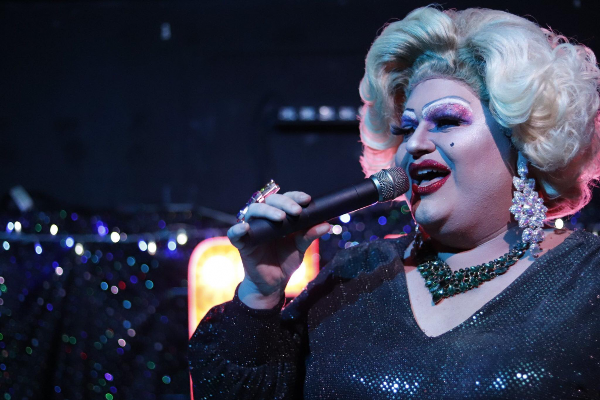 Pat Clutcher is Brighton’s newest misleading lady known for chandelier ear rings and bringing a heady mix of showtunes, pop, banter and mischief to venues in Brighton and beyond! Graham Robson caught up with her to talk corona, cabaret and keeping your spirit up in these uncertain times.

How have you been spending your time?

Today is my 18th day of self isolating… I started a little bit earlier than everyone else, as soon as the adult panto was cancelled, as I live with a nurse who was working on the ICU at the Royal Sussex, caring for the virus sufferers, so I thought I would isolate early, rather than be a potential spreader.

Thank God for Disney Plus! I’ve been watching the entire Marcel back catalogue in chronological order, which has been taking up a lot of my time (thankfully!).

What have you been up to online?

I tested the water with an online show at short notice towards the end of March; I enjoyed it! It was basically Pat Clutcher, getting drunk on Newcastle Brown Ale, singing requests whilst in a nuclear bunker… it was camp! The response was epic. I think the video’s had nearly 3,000 views, and it just goes to show that we all need a bit of light relief in these extraordinary times.

How did it compare with performing live?

It’s totally unlike any live performance that I’ve been a part of. If anything, it’s probably nearer to being on OnlyFans or Cam4! Haha. It’s strange, but great that technology gives us the ability to do this, and allows us to continue doing the things that we love, for the people we love. It’s so strange, though, not having a live audience to react, especially as there’s about 15 seconds delay on Facebook Live!

Have you spotted any other good stuff on the web?

I think every drag queen in the city has dipped their toe into the ‘online show’ pool, it’s really great to watch. However I need to give a shout out to the fabulous Golden Cross in Cardiff, who are putting on entertainment online across the whole week with the legendary Mary Golds and Joanne Bumme. They really deserve medals for doing their bit to keep spirits up; they’re like Dame Vera Lynn but with a meaty tuck!

Any tips to keep our spirits up?

My only tip would be to keep talking, whether that’s online or on the phone. We’re all in this together. We are all experiencing loneliness and isolation, and it’s very tough on our mental health. But technology can unite us; use it!

What are your plans for when this is over?

My plans, post-Corona, is to get back as soon as I can to do what I love, entertaining the assembled masses! I really am looking forward to the whole country having the biggest party ever when this is all finished! And I hope that day comes sooner rather than later!

When the news broke, I don’t think I was shocked. I think in the current climate it was sadly inevitable, regrettably, and I am sure it wasn’t an easy decision for the Pride team to make. I’ll miss the community feel that goes into preparing for Pride; everyone from the venues, the staff, the regulars, the non-regulars, the cabaret performers… there’s a sense of pulling together and putting on one great showcase for our city and our community.

As a former venue operator myself elsewhere in the country, I understand how Pride generates a lot of revenue for some bars, which enables them to keep us entertained the rest of the year. Without putting too fine a point on things, once this nightmare is over, our community needs to put on the biggest of celebrations in these bars, and make sure these safe spaces continue.

I think it’s safe to say that Brighton Pride 2021 is going to be one hell of a party, and I hope in 18 months I am reading in Gscene that it broke fundraising records for The Rainbow Fund!

Any words of wisdom to get us through?

Words of wisdom? Well, I’m a bit crap at this sort of thing, but I saw a post online yesterday that said “after every storm there’s got to be a rainbow”. I guess that it is, and that’s what I know we are all holding out for. One day…