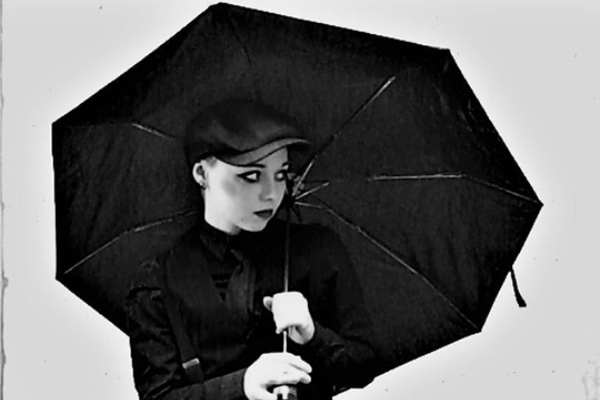 Blue McLeod is a Winnipeg-based, non-binary artist; a multi-instrumentalist, composer, and cartoonist, as well as the creator of an art rock project called Grotoko, which draws inspiration from punk, grunge, and classical music. Graham Robson caught up with the Baroque-pop art-rocker to find out what they’ve been up to online, what we can expect from their new music and what the future holds.

Hey, what have you been up to during lockdown?

I’ve spent lockdown doing a lot of recording at home. Since I’m not currently working a normal day job, I’ve had time to focus on some shelved projects such as animated videos and other visual art projects. I’ve been taking the time to learn a bit of other languages for future tours, and also learn more about photography and how to get better at shooting videos, since I likely won’t be able to have help with those things for quite some time.

How have you adjusted to working from home?

It’s definitely odd working from home, especially when there aren’t really any shows coming up or anything that I’d normally be working towards before the pandemic. I’ve found that it really helps to maintain a schedule in order to stay productive. I always try to get up early and put a certain number of hours into each project every day.

What’s been the biggest impact to your creative output?

Performing live was a huge part of my project, and live streams are definitely not quite the same. The pandemic has affected what I focus on as an artist. Previously I had been putting energy into planning a tour and my album release show, and now those things just aren’t happening. The pandemic has meant that I put more energy into creating music videos and focus on social media more than usual, which isn’t a bad thing at all.  It’s given me the chance to really buckle down on newer material as well.

Have you been watching much online?

A lot of friends of mine have started doing live streams, so I try and catch as many of those as I can. It’s been interesting watching some of my favourite performers adapt to playing live into a camera.

Do you have any comments on how lockdown is affecting the LGBTQ+ community?

For one thing, a lot people in the transgender community have likely had surgeries coming up that have been affected. I am one of those people. There’s also the possibility for others that their medications or other treatments have been affected, which can be extremely frustrating when a lot of us have already had to wait a very long time for certain steps in our transitions.

A huge issue that stands out to me is also the fact that a lot of LGBTQ+ members don’t really have the safest places to isolate, especially minors, because the people around them don’t accept or understand them. A lot of people don’t have others around them that they can safely come out to or talk to if they need to talk, and that can be pretty terrible. I have friends who at a point in their lives, their family had booted them out of their homes after finding out about their identity, and that situation can be terrifying to think about in this period of time.

This pandemic has likely been a challenge to everyone, but for those without the same supports as others, it’s an even bigger challenge.

When this is all over, I am going to put on a show in Winnipeg, before going back to Montreal, where I will put on other shows. I’ll also be going to every local show that I can go to, and then I’ll be booking a Canadian tour. I’m looking forward to being able to travel when this is over, and I’m looking forward to going back to performing on streets and in metro stations. I plan on hugging some friends. I look forward to random conversations with strangers and every other small interaction that we used to experience all the time before the world flipped upside-down.

Any tips to keep us busy?

Cleaning has weirdly become a favourite activity of mine somehow. Other than that, I find learning new skills, even if they’re simple or even somewhat useless, is always rewarding. Some things that I’ve learned to do when I was bored include juggling, learning Morse code, and sewing, which is an incredibly useful skill. Cards have suddenly become useful to me. Reading is always good, or listening to audio books if you’re like me. I would recommend searching for things that you haven’t experienced yet, like music that you haven’t heard, or films that you haven’t seen. This is a good time to look for small things that you’ve been meaning to do but just haven’t yet.  I’ve definitely got a pile of those.

I’ve recently released a live-acoustic video of my song, Mister and you can find it on my YouTube channel. On top of that, I’m working towards the release of my second album, Periwinkle, which I am very excited about. In the meantime, you can find my first album, We All Fall Down, on Bandcamp, SoundCloud, Spotify, and other streaming sites.

Any words of wisdom to help us through?

Generally what has been helping me through this, is counting all of the small things that I’ve lucked out on, and remembering that everything is temporary and that change is inevitable. Eventually this period of time will have to end and time flies. Someday, for some of us, there’s going to be some small part of this situation that we’ll miss, as weird as that might sound right now. The idea of ‘nobody ever gets everything that they want’, has somehow helped me through the ‘why did this have to happen?’ part of accepting our current reality.