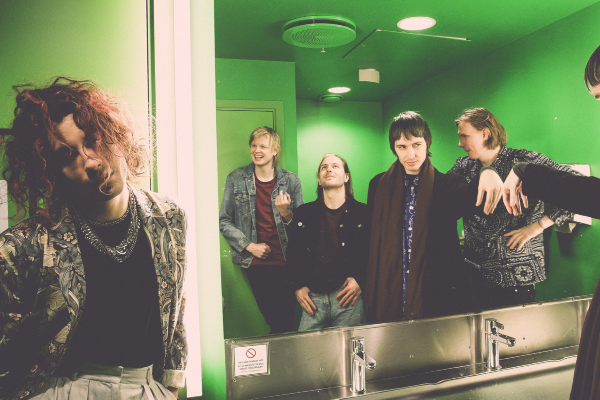 Hey Henrik, how have you been spending your time in lockdown?

Oh you know, it’s been kind of a pendulum swinging between productivity and climbing up the walls. I’m just generally not very good at sitting still, or being stuck inside, but we all gotta pull our weight in this, and I’m fortunate to be living in a country with a good health care and being young and healthy, so the very least I could do I stay at home.

It’s was weird though, we finished some new recordings just as the country started locking down, so while it felt like the whole world came to a standstill, we started ramping up. We signed with our label and management and started preparing for releasing new music, so it’s been pretty busy. Idk, it’s all kind of upside down, good with the bad and bad with the good.  Mostly I’ve been hanging out with my partner and my cat, working on demos, oh and I got a PS4 <3

Has it been hard to adjust to working from home?

The ‘working’ part of my everyday routine hasn’t changed all that much, I’ve always worked a lot from home, but not being able to balance that out with going out, and by extension being able  break the day up a bit has definitely shifted things. It’s been an adjustment, but I think I’m starting to settle in.

What’s the biggest impact to your creative output?

Lately? Being constantly at home has definitely resulted in a lot of demos and new material, but at the same time, most of what I write lyric-wise is spur of the moment things inspired by being just an individual as a part of the world. So being somewhat cut off from the world has made that process more difficult. Like, I don’t think we want to or are going write a Corona song anytime soon heh.

Have you been watching much online?

Oh man, yeah, way too much probably. I always have the TV on in the background. I don’t like silence too much heh. As we speak I’m finally watching The Last Dance on Netflix, and it’s so good. I’ve also made a good dent in the ever growing list of movies I’ve been wanting to see, but haven’t gotten around to until now.

Do you think lockdown is disproportionately affecting the LGBTQ+ communities?

I mean, I think it must be very tough on anyone who doesn’t have a stable home environment right now, with quarantines and limited possibilities of seeing people outside of your living situation. Since, unfortunately, a lot of LGBTQ+ people face difficult relationships with family I’m sure there’s many in our community who are stuck in difficult situations, and cut off from their normal supportive network outside of their home. Same goes for people in abusive living situations. I just think it’s really important that we all to check in on our people and try to stay connected the best we can given the current situation.

What are your plans for when this is all over? Anything on the horizon?

Some things are hard to plan, since we don’t know when things are going to be back to normal, like live and whatnot.. With that being said, I don’t know how much I’m allowed to divulge, but we certainly have more music to release.. Expect more new and more expansive LQ-material in the rest of 2020.

Any tips to keep busy?

I don’t know, if you have stuff you’ve been wanting to do, but been putting off because of the daily hustle; go get it. Read up on subjects you’ve been wanting to get into, have Zoom coffees with people you’ve been wanting to catch up with, but I also think it’s really important to remember that it’s totally fine to do nothing; to feel the weight of what’s happening in the world, and not really feel like you have the energy to crush that overall meaningless ‘to do’-list. That’s totally fine as well. It’s uncharted territory for most of us this state what we find ourselves in, so just do whatever feels right for you.

Also, the Spider-Man game to PS4 is pretty cool.

Well, you should certainly check out our new single, and we might have some more stuff just around the corner..

Words of wisdom to see us through?

Stay strong, take care of yourself and the people around you. You’re not a failure for eating grilled cheese 5 days in a row. F**k Trump.