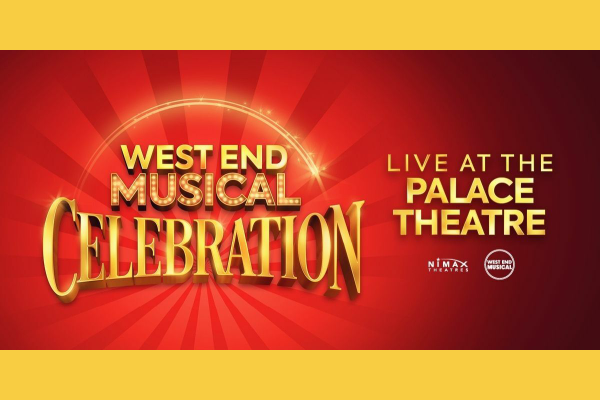 From the moment director, host and co-producer Shanay Holmes welcomes us  back to the Gothic splendour of the Palace Theare, London, we know we’re in for a night of raw emotion.

Backed by a 5- piece band, West End Musical Celebration was originally created as  a Christmas event but the long 3rd lockdown put paid to that. So now it’s recreated not so much as a tribute to the great shows the West End has to offer, but more an all-singing, all-dancing beacon of hope  for the reopening of the entertainment business.

Shanay opens with Can’t Stop The Beat as if to underline the point, and then Ben Forster , a former Jesus and Phantom, gives a soaring, effortless Music Of The Night, with its top notes never better sung. The rainbow became associated with the NHS  this last 15 months so it’s  fitting the magical voice  of Sophie Evans gives us a tender Over The Rainbow.

Ex-Wicked star Alice Fearn produces a bluesy, raunchy They Just Keep Moving The Line from the made-up for television musical that never was Smash, with its great Kander and Ebb-like beat. She has a wow  factor of a voice – just terrific.

Trevor Dion Nicholas wowed audiences as the Genie in Aladdin and as George Washington in Hamilton. Here he’s a tender suitor  to Sophie Evans in the delightful Suddenly Seymour.

Layton Williams seems to be in everything at the moment – the latest episode of the Theatre Channel, Jonathan Harvey’s iconic Queer play Hushabye Mountain  and here live on stage, the ex-star of Jamie displays his full-octane sexual power , commanding the stage in his tiny purple  briefs in Sex Is In The Heel .

Ben Forster gives us an appropriate song of isolation -Waving Through The Window , with its emotionally charged lament. And then as Shanay tells her lively audience, we must have THE Song of Songs. Alice Fearn, an ex-Elpheba, takes the Palace roof off with Defying Gravity – and she doesn’t even need the usual mechanical lift.

And then we get yet another powerhouse of a voice in the wonderful Rachel John with Stephen Schwartz’s  When You Believe from the Prince of Egypt. And to top even that, the sensual Layton re-enters with a mash-up of Tainted Love and Bad Romance. And that’s only  Act 1 over !

Highlights of the second half for me were Rachel John out-Streisanding Streisand in a full-bodied  Don’t Rain On My Parade, and Alice Fearn in a cold kingdom of isolation with Frozen’s Let It Go. Trevor re-creates  his Genie in the genial ( sorry) You Ain’t Never Had A Friend Like Me. With his full voltage camp scat singing, it’s  great fun.

Layton William struts his stuff again with the touring cast of Jamie with And You Don’t Even Know It , and Rachel  John returns with I Wanna Dance With Somebody and the fitting climax is The Greatest Showman’s From Now On with its optimistic “we will come back home “ – let’s hope , despite a delay in lockdown easing,  that our West End family greets us all again soon.