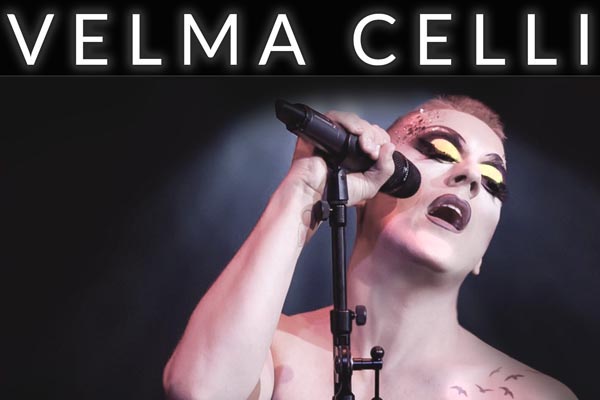 Explore the snowy scene of a Christmas classic reimagined, through the voice of Velma Celli.

Chord. Then twinklingly melancholy piano notes. The intro to a, dare I say it, Twilight film complete with sweeping camera shots of a desolate snowy landscape rushes into your conscious.

Thin vocals swifty float into the scene, upon a trotting horse of alternating piano notes. They leave warm footprints in their heavily reverbed sustain, as if each note echoed the clip clop of a horse charging.

With the eerie smoke of a scene set, Queen of drag Velma Celli conducts an orchestra of synthetic strings and drum machine, sewn into a less than festive dance track take on a Christmas classic.

I must admit, contrary to popular opinion, the original cult classic we’re walking in the air is a tad tedious with its continuous unrelentingly droning replay each year. On first listen it’s delightfully airy and light, but with each regurgitated spew the track is weighed down with the same sickening rehash of sad yet festive tracks. And historically, covers or attempts at reinventing renditions are all too often similar from their origins.

But with all that said, Celli actually avoids the blueprint of a Christmas cover track, with more of a trippy dance approach to the song. She changed up an old worn out woollen jumper, for a silky dance gown, and to be honest this version could potentially fit all year round.

With faintly tortured vocals, that carry just a hint of remembrance rather than drowning in hyperbolic overdone vocalisations, Celli wistfully entwines the tear-jerking passion of the original with a glitzy glamour laced sparkle fit for a modern twist.

The whole track is a teen romance movie. You know the one I mean- the sort where the vampire couple, that couldn’t stand each other earlier, are dancing reluctantly, which somehow slowly ignites the passion and lust for one another they’ve been harbouring all along.

There’s a slow build up, mirroring the tension between the star-crossed lead characters. Followed by yet another layer of build up, teeming with sympathetic synth strings and orchestral drums, the track climbs a ladder of energy until it reaches a barless tier. This break in the pattern takes the form of a twisting instrumental, reminiscent of a battle scene in a Disney movie. Bombarded with barrages of booming timpani drums and eerie strikes of high pitched whistles, the section transforms itself into an anxious charge of soldiers across a frosty field.

With all its glorious power and transformation of a worn out track, the piece is still missing shade. It’s bathing in light and loud calls smothered in legato and melisma, but is missing the contrast entirely. Instead it just switches genre.

Each time the track builds in volume and riddles itself in anticipation, you expect there to be a crashing climatic point. But instead the piece just loses itself in a new genre. Like the build up to a bass drop minus the climatic crescendo, the song constantly charges itself with energy throughout but with no release; it needs an ending focal point. Although there is a slight hint of one nearing the end of the track, with the grasp for a powerful a capella end, but doesn’t deliver soon or strong enough.

Overall the song is a welcome change in Christmas pace, but still requires some variety in volume and dynamics to really hammer home the power the track encapsulates.