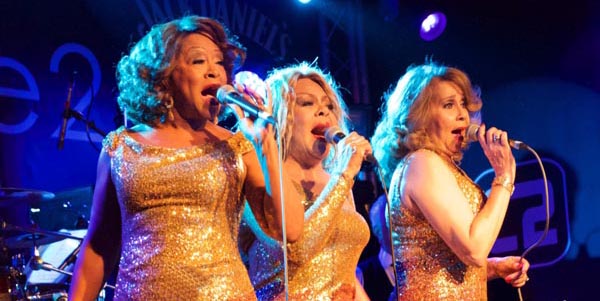 Barely ten minutes into their live set at Brighton’s Concorde2, Helen Scott of the Three Degrees reminds a seemingly ecstatic crowd of their placing in The Guinness Book of Records as the longest running all female trio in music history.

If tonight’s performance is anything to go by, they show little sign of hanging up the sparkling slingbacks anytime soon.

Sashaying onto the stage backed by an exceptional five piece band, they launch into the Peaches & Herb disco classic Shake Your Groove Thing and the Concorde crowd’s response is deafening. They barely draw breath before tearing through Degrees classics Year of Decision & Giving Up Giving In, switching the centre stage and lead vocal spot regularly through the night. “We don’t mind you taking photos, really we don’t” they announce and at the only rest break in the next ninety minutes, happily pose as the crowd surge forward with smart phones aloft.

With a fifty-year back catalogue to choose from, inevitably there are favourites missing from the set list, but they make up for it with each twirl, step and head flick punched into the show with the same panache and enthusiasm they have always delivered. Even during the spoken segments as they dole out choreographic instructions to a somewhat sweaty crowd (a typical Brighton mix of party ladies and gay men), the music never stops and even Freddie Pool’s water sips and Valerie Holiday’s sweat towel dabs appear rehearsed and only truly drip with class.

An extended version of When Will I See You Again is given something of a turbo charge and thus the pace never eases but absolute centre-piece and crowd pleaser was a terrific Dirty Ol’Man “You can’t keep your hands to your self!”

As they eventually exit stage right, Scott announces to a crowd who now appears far more exhausted than they “We love you!” and we all crawl off to our beds much happier than we were some two hours earlier.

The Three Degrees tour continues in the UK, and they play Bournemouth on July 12. They return to Europe in November following dates in Japan and the US, and play Gran Canaria Winter Pride on November 14.