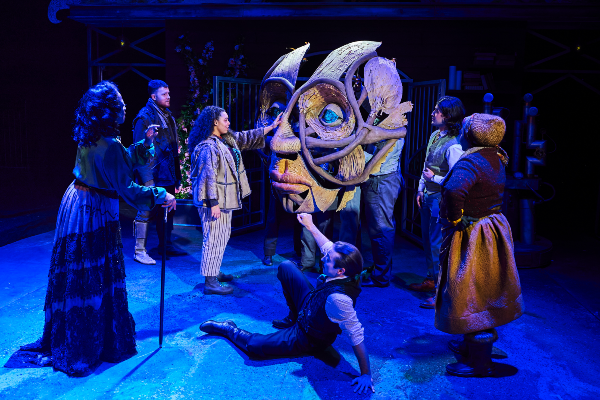 The Sorcerer’s Apprentice is best remembered by Dukas’ dramatic music , and Disney’s film Fantasia, where a disobedient Mickey Mouse casts a spell which leads to overflowing water buckets and dancing broomsticks.

Richard Hough and Ben Morales Frost have written a modern-day musical theatre version , which would cheer the heart of Greta Thunberg ,  as it pits an evil capitalist energy baron against climate change protesters .

If that sound didactic and boring, think again. What they create here is an enchanting tale , set in a bleak cold northern town under the dying  Northern Lights – the Aurora – but with a strong current of hope and happiness.

Produced by James Seabright and directed by Charlotte Westenra , it was filmed at Southwark Playhouse without an audience . This new musical  has much to commend it. Mary Moore , making her debut , is a feisty, independent but shy teenager Eva, at odds with her grumpy father Johan, who would be at home in the pubs of Emmerdale  or Coronation Street.

Johan (David Thaxton) is a complex magician – at war with society, but more importantly ill at ease with his past. His quandary is that he cannot forget or forgive that his wife died giving birth to Eva and so every time he looks at his daughter he is filled with regret and an almost palpable dislike for his offspring. It’s a very strong performance full of angst-ridden nuance .

Lest we get too deep into this, the creators give us a comic villain and his overbearing mother, and a pleasant little unlikely love story. Throw in dancing broomsticks from the original and a monster spawned by the Aurora and there’s a lot to enjoy .

Marc Pickering as the Mummy’s boy boss of the local refinery is oily, nasty and very funny, unable to accept that his process for drawing down the Aurora to create boundless lighting for the town, is causing a major weather crisis.

Dawn Hope as his mother is old, bitter and magnificently spiteful but of course redeemable as in all good morality tales.

Nicola Blackman is grossly underused but squeeezes every last drop of broad comedy out of her role as  the local innkeeper. She really ought to have a blockbusting song.

Yazdan Quafouri is a pleasing juvenile lover  as scientist Eric, wooing Eva in a delightful duet full of contradictions.

Overall the songs are reminiscent of Lloyd Webber – and I mean that in a good way – but not hugely memorable out of context.

Does Eva save the day and the Aurora ? Well, you’ll have to tune in to find out .

The show is available to stream at tsamusical.com until 14 March. It’s a little bit of lockdown magic.