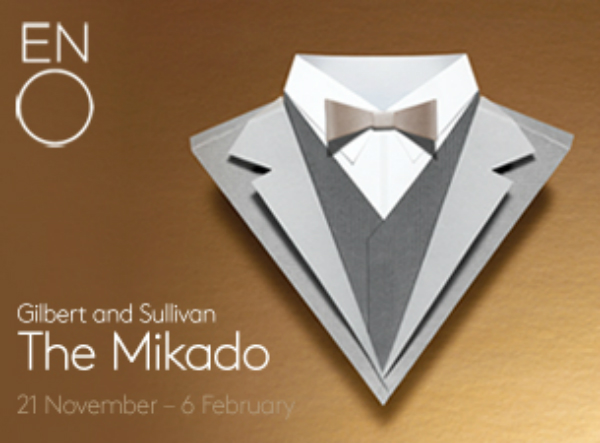 Set in an ever-so English 1930s seaside hotel, bleached white with privilege and wealth Jonathan Miller’s Marx Brothers-inspired song-and-dance Mikado is a popular hit with audiences of all ages. A distant picture  of Hokusai’s Great Wave off Kanagawa is one of the only gentle echos of this operettas beginnings. The combination of Gilbert’s virtuosic wit, Sullivan’s memorable melodies and Miller’s hilarious antics is irresistible, this is the 14th outing but it still fizzles and gleams with energetic fun.

The plot is typically labrynthian and silly; Nanki-Poo loves Yum-Yum but there’s just one snag;  she’s betrothed to Ko-Ko, the new Lord High Executioner and Ko-Ko needs to find someone to execute and quickly, so chop chop! Otherwise, it’s his own neck on the block. Maybe Ko-Ko and Nanki-Poo can come to some arrangement… without anyone losing their head?

The narrative thrust of this production is thrilling and the music and singers barrel through the most ridiculous and well-loved songs with aplomb. Setting it so firmly in the British context does rather make some of the Japanese stuff going on seem odd, but as it was written as a satire of British social manners anyway it works in the way that Miller changed the focus. It’s silly enough not to matter but the change of emphasis also brings the unyielding suffocating pressure that surrounded Victorian society into full focus, and thus it’s ugly rotten underbelly. It’s a neat trick and one that Miller does well, it’s not easy to give the Mikado some depth.

Robert Lloyd’s Mikado was wonderful, charming and ruthless and with just the right amount of raising eyebrow threat and his voice rumbled around the coliseum auditorium giving us all a shiver. Richard Stuart, the acknowledged master of the Lord High Executioner’s pathological ‘little list’, returned as Ko Ko and he was full of fun and sideways whispers as is possible, his (own) list was wonderfully funny and beautifully rhymed, he had the house roaring. His humour is a careful combination of off the cuff Mike Reid cockney roughness and ultra faux sleazy Groucho Marx charm and it’s over the top and suits the intrinsic silliness at the core of the Mikado well.

Mary Bevan and Anthony Gregory as lovers Yum-Yum and Nanki-Poo were sweet, although Gregory’s voice was a little small in this big production and occasionally got lost in the orchestration. Yvonne Howard’s Katish was superb, her voice huge and commanding and her presence a comic master class in timing. The times Howard and Stuart were on stage together were the highlights of the evening for me, both singing and choreographed routines were touch perfect, deeply inappropriate, lovely coupling, lovely singing, laugh out loud funny.

The all-white twisted perspective set from the late Stefanos Lazaridis references Syrie Maugham’s style and focused the action well and the dancers choreographed by Anthony van Laast were full of spring, froth and endless arch camp mannerisms which made them a delightful foil to some of the action. The male dancers in particular were studies in sly camp, lovely to watch them bicker and jostle in the background. Sue Blane’s costumes have an understated elegance about them, all suggestion without precision and I enjoyed the sumptuous elegance of Katish’s Hollywood Star outfits in particular.

Young Fergus Macleod conducted the orchestra with a sharp and jolly texture not giving into the current over romantic Sullivan style that can sometimes drown out the subtleties of the sophisticated Sullivan melodies in the music but allowing them to rise with a unforced edge, not to everyone’s taste I noted but I enjoyed it, the percussion was superb.

This was a wonderfully frothy production perfect for the festive period and not showing any of the wear and tear that a production this old might. It just goes to show that when you get something right and spend a bit of time thinking through the one stage dynamics of the singers you can end up with something rather fun.

The Mikado is a lovely piece of upside-down inside out reflective Victoriana with a strong hard undercurrent of relentless self-serving hypocrisy, but you could sit through this production and not notice that at all, if all you want is lovely singing, dancing and giggling then this is the production for you. If you fancy something with an edge that is both subversive and challenging then again this is the production of you. There’s an extra level of meaning added to the plots obsession with beheading and a lingering death and the juxtapose with refined etiquette, manners and privilege but this is handled well, with straight to audience humour and there’s no added-on attempt by very competent revival director Elaine Tyler-Hall to unpick this (thank goodness).

Language: Sung in English, with lyrics projected above the stage

Tickets: Available from £12. There are now at least 500 tickets at every performance at £20 or under. Find the right offer for you.