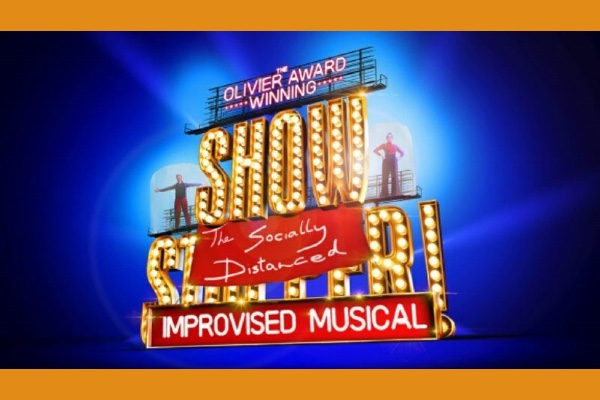 It all starts with a phone call from impresario Cameron Macintosh . It seems he needs a new show to put on in the West End . Luckily answering the call on stage at the Garrick Theatre is Dylan Emery who is just about to referee the creation of an instant musical based on audience suggestions.

And off go the Showstopper team – five characters in search of a story, some tunes and even a title. The cast are brilliant as always at plucking material from the thinnest of airs and going with it. So for this first of a series of shows over the next few months, we get audience requirements  – the setting must be a group of out-of-work actors who turn to other jobs but can’t shed their theatricality. Fixed. The songs must be in the style of Rocky Horror, The Lion King and Hamilton . Fixed. And half way through the show we get its title A Change of Direction. Fixed.

The rest is down to the cast of 5 with interventions by Emery to keep them on their toes. They hardly seem to need the prompting – pumped up with the adrenalin of crazy, funny, touching moments, the show seems to have a life of its own and it’s faultlessly brilliant.

It’s just so difficult to believe this evening is being created before our eyes just for us – but it is. A Change of Direction becomes a poignant if madcap story of how little things can change the world . So the over-egged theatrical knight Sir Stanley Kendrick summons a band of fellow thespians to perform a show – catch is it’s got to be a secret play, performed in a shopping mall but with the audience unaware they are taking part in a production.

And the show , based in a nail parlour triggers a little act of kindness that multiplies faster than Covid round the world. If that sounds far too serious, it’s not as the action plays out with parodies of more of our favourite musicals , including Six and Phantom and a brilliant passage mimicking  Sondheim at his best.

Crucial location turns out to be Brighton’s pebbly beach , and though Sir Stanley’s plan falls down when the public realise they have been manipulated, there’s a truly happy ending based on the humble little Brighton pebble.

It’s uplifting and hugely entertaining, the cast blossoming at each twist and turn and even mishap in the story-telling. They all excel – Andrew Pugsley, Adam Meggido, Pippa Evans, Ali James and Justin Brett, ably accompanied musically by Duncan Walsh Atkins and Alex Atty.

Catch them if you can – who knows your ideas may be used int their next brand new musical. Showstopper !

They perform for  a week at Watford Palace Theatre from December 15-19.