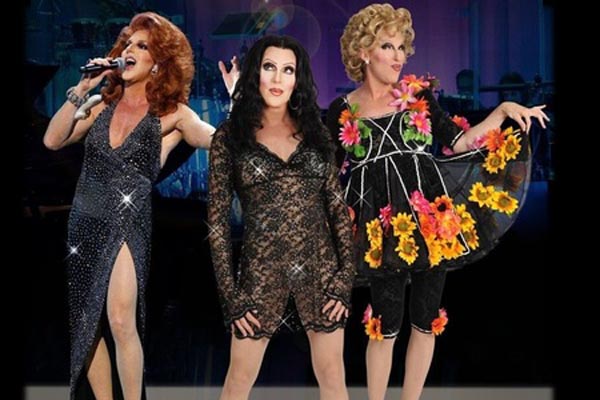 Whatever else you do this week, get a ticket and go see the 5-star phenomenon that is Randy Roberts.

CALLING him a female impersonator makes him sound less stunning than he is, because he not only brings legends Bette Midler and Cher to the cabaret stage; he also adds his own secret ingredient- a kind of self-deprecating parody.

Opening in a red glitter jump suit, he adds to the costume a skirt and huge red feather headdress and belts out a terrifically powerful medley from Hello Dolly.

Randy‘s skill is that he not only looks like his heroines, but he also sings and speaks like them.

The high cheekbones, the wide-eyed knowing look, the very walk is Bette’s .

“I know what you came for, and I’ve got it in excess “ he tells us and he’s not wrong. He’s quickly out into the audience and picking a victim – who is of course a willing participant. Last night it was Matt, who manages BA pilots. The digs and references to Matt in both dialogue and song come thick and fast and it’s all in “ the best of all possible taste” as the late Kenny Everett would have said.

The show is in three distinct parts, and while he rushes into the “kitchen” as he describes it, we get a video of song and chat to keep us amused. In a few minutes he is back – looking every inch Cher. “Bang bang” leads into “If I could turn back time”.

He’s all huge black curls and sparkly black and silver outfit, with legs that go on forever.

His Cher is a little more parodied and his strangulated speaking voice gets lots of laughs. But when he sings – OMG – it IS Cher, who he claims is on her 17-year farewell tour.

Poor Matt, who is loving it, gets dragged up on stage, and with added Sonny wig and false moustache, plays his part in “I got you babe”. The voice is perfect again – I particularly love “it’s in his kiss” where Randy accentuates “kee-ass “.

Then it’s offstage again and we get a video of Randy as a man, transforming before our eyes while singing “I put a little more mascara on”.

When he returns it’s as a fiery redhead, still in drag, but this time a persona of his own creation. It’s what he calls his “lounge act” and the songs bring out the best in him when he’s not trying to be someone else.

I particularly loved “If I can’t sell it, I’m gonna sit on it – I ain’t gonna give it away” – which he says refers to a piece of furniture but is actually stacked high with bodily innuendo.

As he ends his 75 minute set, he gives us his true male baritone in an electrifying rendition of the Phantom’s Music of the Night.

He could certainly grace any stage with a Phantom or even a Norma Desmond. Viva Randy.

Randy Roberts is at the Crazy Coqs, off Piccadilly Circus until June 23. His latest CD Back in Business is out now.