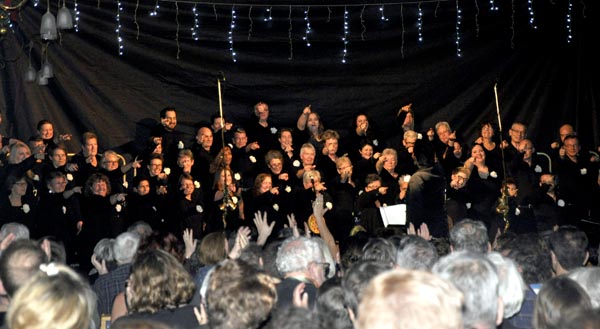 December 10, 2017 will go down as the ‘clash of the LGBT+ choirs Christmas shows’ with three of the city’s LGBT+ choirs all giving their Christmas concerts on the same evening.

The programming clash was a real shame because many like to support all our choirs but this year that proved impossible. Hopefully next year diaries will be consulted well in advance.

There was plenty of love in the room at St Georges Church, Kemptown for the Rainbow Chorus Christmas concert, The Sledge of Glory, which was a sell out.

The Rainbows enjoy a firm fan base and were enthusiastically received and encouraged in both halves of the show by a noisy and appreciative audience.

They performed a selection of yuletide numbers ranging from Christmas Carols O come all ye faithful and Ding Dong Merrily which the audience enthusiastically sang along to, to the more traditional Christmas numbers such as White Christmas, The Sussex Carol and a technically tricky arrangement of Jingle Bells which the choir delivered very solid and musical performances of.

Their rendition of The First Noel combined with Pachelbel’s Canon accompanied by two solo violinists (Katie Hoad-Hitchings and Lizzie Howard) was particularly effective as was their performance of Sinead O’Connor’s In this heart which opened the second half of the show and for me provided the musical highlight of the evening. A beautifully phrased and tender performance which could almost be lost in the programme surrounded by the more glamorous and well-known Christmas numbers.

The Rainbow Chorus really come into their own in the big SATB soulful choral arrangements which included Deep River, The Edge of Glory, Africa, Wonderful World/I Love you and Chorus of the Hebrew Slaves which was receiving its first performance by the choir. In each of these numbers the Rainbow’s opened up and sang their heart out. Their collective sound is very impressive, and they are able to communicate their joy of sining to the audience, however they could still do with a few more bass singers to give the choir a firmer foundation. Each time I hear them sing the sopranos and altos are becoming ever more confident and this needs to be matched by more basses in particular.

Aneesa Chaudhry and her enthusiastic approach to music making has created a singing unit that punches well above its weight. The Rainbow’s are a non auditioning choir which in itself can present musical problems but accompanist Mojca Monte is the perfect foil to Aneesa’s leadership and holds this choir together with her masterful percussive musical accompaniments. Together they make a great team.

Paul Shuttleworth and Nick Williams were the featured soloists and sang very well in I Love you and money was raised for the Older People’s Project at LGBT Switchboard from the raffle.