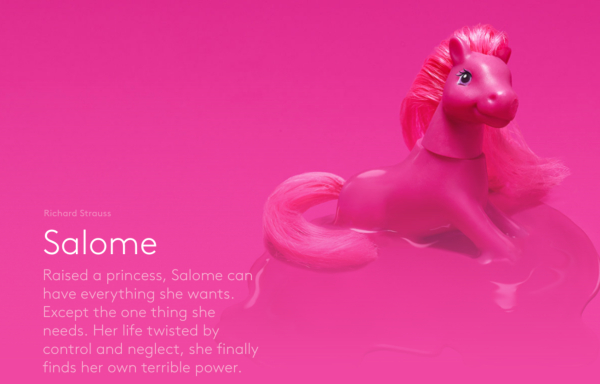 Based on Oscar Wilde‘s lurid play, Strauss‘s opera is an intense psychological exploration of the Salomé story. Her brutality and power are the product of the warped cycles of masculine privilege that is passed down through the generations.

Salome is among the works that set the course of music in the last century. It is celebrated for Salome’s ‘Dance of the Seven Veils’, which Herod demands in return for whatever Salomé wants. Her choice is shocking, and reveals how far she will go to embody the twisted ideals of her parents’ world.

Scottish mezzo-soprano Allison Cooke is a shivery striking Salomé , cold and calculating, soft and precious and convinces with her acting of Salome’s agency and knowing presence, her voice doesn’t quite match her magnificence. On some occasion she’s Barbie Salomé, I dread to think what she’d be like on Tinder.  David Soar as Jokanaan is fine, a first glimpse tangled up on stage in plastic sheeting under some florescent lighting tubes, feet clad in red stilettos and prone. He looks like a morning after a rather robust Rocky Horror Show night out, but he convinces in the part of the possessed, confused and demented prophet.  There’s an odd camera contraption attached to his head, like something out of Saw, focused on his mouth which is projected, huge, raw onto the stage behind him. It’s also the focus of Salomé’s gaze as she is furiously rubbing herself, the mouth, the words, and the kiss.  Soar’s voice wrapped itself around the text with conviction, but he’s so often off stage singing from the wings that his physical presence is lost to us.  After a while the mouth projections turns 90 degrees, is it a malfunction or a suggestion of the vagina being rubbed as Salomé writhes over the dead Narraboth? Who knows.

Stuart Jackson‘s Narraboth is an excellent portrait in twitchy super fan geek boy whose voice was excellent; he’s killed himself as he can’t bear to hear Salomé fetishize Jokanaan, as he dies, unobserved & uncared about by Salomé she unbinds herself, Jokanaan echoes this movement using his bandage to cover his eyes, to protect and preserve him from her lusts.

Michael Colvin’s Herod is a slovenly perv, half dodgy Santa half comb-over darts player in a drag-race girdle, all lecherous but more pathetic than prophetic and doesn’t seem at all beguiled by Salomé’s passions, but then as she’s cold and calculating it’s not difficult to understand. His voice rolls around as much as he does, full and profound and gives us tonal texture to his deluded superstition’s but no real feeling of the dread he feels.

Susan Bickley’s Herodias played like some demented fairy godmother, observing and somehow never being part of the action until the very last moment, is tragic and vengeful and harks much stronger to the original story of  Herodias having driven the dance and ‘death to the prophet’ request for his head.  Curiously enough it’s Wilde which gives Salomé agency and intent, fully aware of her actions and not just a psychotic pimped out Pinocchio. The final scenes add only confusion and more oddly familiar queer intimacy to the plot and although dark and somehow in control throughout the production Bickley never seems to hit full stretch.

You can read the full synopsis here

Conductor Martyn Brabbins drove the orchestra to a pitch of rich tease and the narrative thumps along and the music kept me entranced when the silliness on stage was starting to confuse me. The music is superb and pitches the hellish journey of Salomé’s descent into psychopathic sensual glee with subtle grace. The famous dance is more of a jerk’n’twerk, Cook hardly moves, grinds and slides up and down the 30ft decapitated pink Brony on stage, staring at us, watching us watching, deconstructing our gaze and the ensemble dances in their Beyoncé masks do some moves and own the space. It’s all about girl power and empowerment but the connection between the key musical parts and the staging faded away from my grasp.

By avoiding real bloodshed and giving us my little decapitated pony cartoon gooey gore we are forced to confront our own desires, our own expectations and here director Adena Jacobs’s new production for English National Opera has done something interesting.  He’s given Salomé back her dignity, twisted, death obsessed, vain and impulsive she may be, but here she’s in control of it all.  The others are all her toys, to play with, pull apart, or avoid being played with. She’s defiant and threatening, abused and abusive, swinging her aluminium baseball bat, making it clear she’s as much pitcher as catcher. It’s all about the gaze in the end, the ones not given and the ones stolen without permission. She’s the one to decide who gets satisfied and if it’s not to be her, then none of us will be.

The opera opens with comments about the consequences of the letch and the dangers of longing & looking and here we see played out in technicolour twaddle the bloody results of obsessive desire and unrequited demanding privilege taking out its anger on the powerless.

Jacobs closes the opera robbing us of the head; that head, just a white plastic bag of sloppy goo, like a take away the next day.  Salomé undeterred and singing with fierce focus goes to kiss it, with her mother’s hands covering her eyes, and then it’s her mother’s lips meeting her own.  No time to think, no head to blink. It a feast of the Freudian absurd and when the gun comes out, slowly phallically placed in the mouth and the darkness falls with that crashing terrible painful musical closure, that final chord once called  – “the quintessence of Decadence: here is ecstasy falling in upon itself, crumbling into the abyss”-  we are left in the dark, slightly stunned by it, certainly confused by it, but wondering if what we’ve seen is as profound a feminist take as it appears to be.

Having a blonde, white Salomé might indicate that intersectionality isn’t a part of this supposed feminist reading of Straus and Wilde. I was unconvinced but the production is certainly saved by the effortless and gorgeous music from the pit.  It was ravishing nonsense.