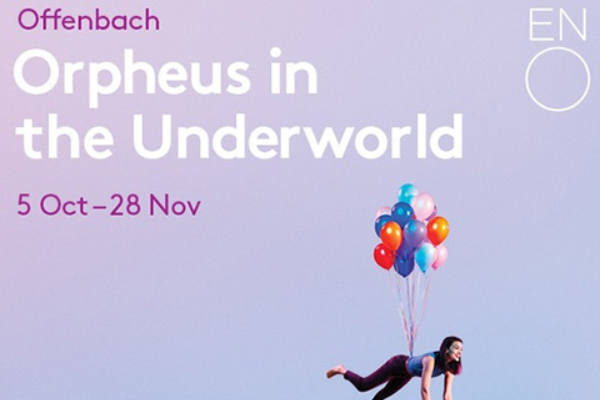 Orpheus in the Underworld

Director Emma Rice makes her ENO (and opera) debut in a rather gritty and glitzy production that gives room for her head turning theatrical spectacle and trademark humour. This Orpheus in the Underworld transports us to a hedonistic, party-filled Underworld. In the notes Rice writes of struggling with the story so goes back to basics and produces a new story with new lyrics by Tom Morris.

The story rejigged a touch to make slightly more sense follows Eurydice who is fooled into taking Pluto, ruler of the Underworld, as her lover after her new marriage to Orpheus falls apart through a still-born tragedy. Orpheus must try to win his wife back, but to achieve the impossible he needs the help of the glamorous, conceited but rather bored gods…

The tag line for Rice’s first flirtation with the ENO is – “Heaven is overrated. Hell is where the party’s at.” It’s an infernal cynical party of indulgent squabbling gods desperate for sensation and quivering under the tyranny of Jupiter, sung here by Sir Willard White as the scheming Daddyo and his wonderful counterpoint Anne-Marie Owens as Juno who gives us carry-on matriarchal realness.  Idunnu Münch, as Diana is intoxicating her voice rising way above the fray, hunting and transporting us into the ether and delicately bringing us back to earth again. ENO Harewood Artist Alex Otterburn hangs it all together as Pluto and his mesmerising wink-wink charm is seductive. Mary Bevan’s Eurydice and Ed Lyon’s Orpheus are both superb, voices clear and rising to the serious emotional intent inherent in their complex love story.

Alan Oke is seedy as hell as John Styx and gives us a wonderful performance of gum-sucking perviness. Baritone Lucia Lucas, the first trans singer on the ENO or any main opera stage in London is charming as Public Opinion, ‘aving the knowledge as a London cab driver but given too much serious heft to allow the humour to penetrate, unlike her lyrical rich voice which was joyful.

This is the fun part of the ENO’s four-opera Orpheus season, although Rice’s adjustments and highlighting of tragedy in the narrative gives it a surreal soap opera feel, not wholly a bad thing as the morality is murky and unpleasant most of the time.  This is dark comedy, underworld laughs, crepuscular in its grim reaper throw-away lines but once you’ve accommodated yourself to the cruel jokes of fake and the directors equally harsh, and subtle, command of the dark humour it begins to take shape. This is an operetta and should be light and fluffy but it lands with such serious intent that it’s wheezing.

Sian Edwards returns to the ENO pit and brings mostly good work out of the orchestra although there was some lack lustre moments which failed to convince, perhaps this will find it’s groove, I’d like to think so, Edwards is assertive and her striking holding of the more delicate parts of Offenbach’s teasing is confident and convinces. Tom Morris lyrics are clever, simple modern and fun and gives some of the rather grim wordyness a darkly comical underlining.

Lez Brotherston’s costume designs squirm with delight across Lizzie Clachan’s set, it’s all great fun, starting off worryingly school play like before exploding into a daft Arcadian swimming pool party on a Tarantino Cruise ship and then plunging into a seedy Soho peepshow world of London in the 1950’s. It’s a charming contrast and with some delightful details, the puppet bees and seductive fly being notable entrancing theatrical moments.  The ENO chorus have a superb time tonight and gave me the biggest laughs and smiles of the night, I left wanting to be dressed as them.

Offenbach’s riotous operetta features the popular ‘Can-can’ and this Infernal Galop here is more of a menacing Macarena.  There’s a lot of anger on show here, and although it helps to dilute the cynical ruthlessness of some of the protagonists it leaves us uncomfortable.

None of this ends well; the gods continue to treat humans as playthings with Eurydice having no agency and ending up in a wretched state of being passed around the crass and vulgar males.   It’s an unsatisfying ending to an unsatisfying story and although glorious to watch and the narrative tensions keeping up it leaves us grasping for closure.  But then perhaps that’s the point of this reworking, that in the end, the jokes are on us mortals.

Worth a trip up to catch this just for the glorious campness of the ENO Chorus in those white balloon body suit tutus, swoon….

For more info or to buy tickets see the ENO website: