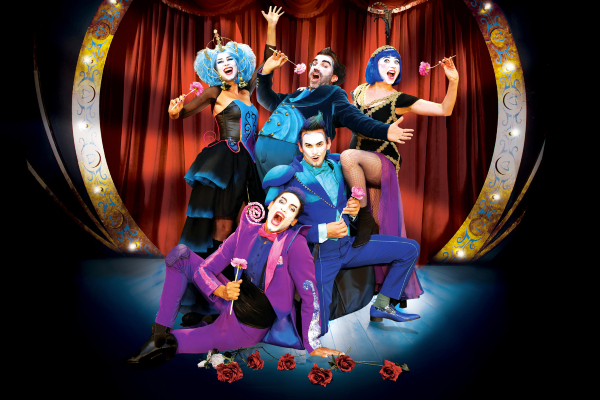 For our international Gscene readers – especially  if  you are in Spain – the Christmas and New Year treat has got to be the 90 minutes of madness and magic that is the Opera Locos .

Imagine the Addams Family being let loose at La Scala , Milan and told  to entertain a discerning opera-loving audience with hits they will all know. Five performers – soprano,mezzo, tenor, baritone and countertenor weave a comic love story between the arias, which they sometimes send up wildly and sometimes sing straight.

Either way they all bring the house down in this modern opera space with vertiginous sight lines in Valencia’s Palau des Arts.

With garish white face makeup and crazy hair they tell us of the love of the scatter-brained ingenue for the ageing drunken tenor who is losing his ability to sing. There there’s a tempestuous nymphomaniac who eventually falls for a man in the front row and drags him onstage. The baritone has a rich voice down in his boots and as Carmen’s toreador has his choice of lover but wonderfully he eventually chooses the muscular hairy-chested camp countertenor.

In between the baritone gives us a masterclass in opera, teaching the audience snatches of some famous arias, and the audience rises to it – even the kids – knowing all the right notes.

When they let rip these 5 singers could grace any  opera house in Europe – their vocal range  is just sensational . And in the end through love of a slightly mad woman, the tenor gets his voice back and takes the roof off with his version of Nessun Dorma.

I think this is a Valencian tradition, but David Ottone, its creator should take it on the road – certainly to London and it would be the highlight of any Brighton Festival. The singers are part of a company of 10 – I guess alternating performances.

What an unexpected joy and terrific evening.