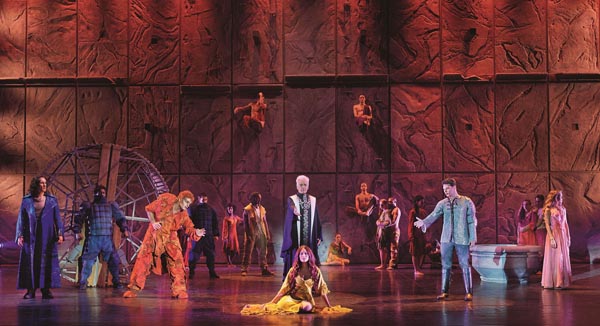 You get one great Victor Hugo-inspired musical and then along comes another. Well not quite.

WRITTEN by Luc Plamondon and Richard Cocciante and directed by Gilles Maher, this is a kind of Parisian Beauty and the Beast set in turbulent times of the late 15th century. But Les Mis Part 2, it isn’t.

The creators describe in their lavish £10 programme as a “musical phenomenon” and delight in telling you that since its premiere in 1998, it has toured 23 countries, been seen by over 13 million people and has been translated into 9 languages.

It’s a stunningly energetic show with acrobats, singers dancers and in London the wonderful ENO orchestra.

But, it is deeply flawed. It’s sung-through structure makes it episodic and there are times when there is just far too much to look at, detracting from the beautiful sweeping songs and equally poetic French lyrics, which are translated rather lamely into surtitles.

The baying Parisian mob here becomes the most amazingly muscular and balletic bunch of asylum seekers who have come to Paris to seek freedom and a better future. Politics aside, this works perfectly well even though they are far too gym-fit to have struggled across Europe.

Daniel Lavoie is every inch the seedy sex-crazy priest who lives for the love he cannot have. His voice is easily their best on stage and he sings his angst-ridden songs with force and clarity.

Angelo Del Vecchio is a very cuddly, loveable Hunchback Quasimodo with a shock of bright crimson hair and raggedy costume to match. But his voice is to die for – deep, velvety and languorous and in his saddest songs, absolutely heart-wrenching.

Hiba Tawaji is a Carmen-like sultry temptress who soars above the orchestra with her wonderful top notes.

The show has largely survived on short runs, although it first incarnation in London played for 600 performances.

Its foray into the USA was predictably in Las Vegas, however, I wonder how it would stand up to the highly choosy Broadway audience.

The music is beautifully melodic and if you can’t see this short run, you can either catch it all over Italy for the rest of 2019 or get the soundtrack in French or English.

Notre Dame completes its run of 7 shows at the London Coliseum on Sunday, January 27.