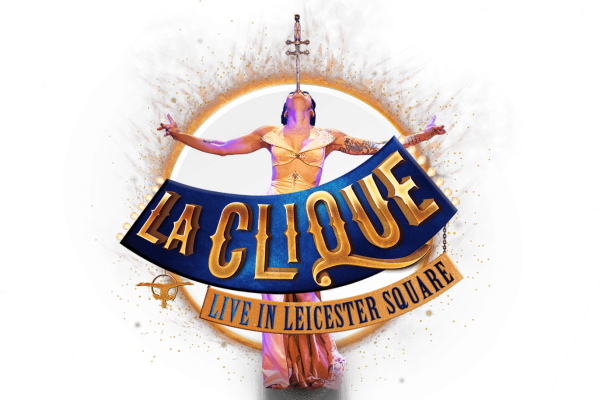 Surrounded by the twinkly lights and huge trees of a festive oasis at Leicester Square Xmas Market the magnificent Spiegeltent sits resplendent, warm and inviting. La Clique are resident there until first week of January  and keen to introduce packed audiences  to their new line up, show and entertainers.

You know what you’re going to get from La Clique, they invented the format and have perfected it. Vintage quality, circus and cabaret classics done with an inventive twist, plenty of sensual and erotic tongue in cheek performers, world class acts who always give 100% and a sprinkling of knowing naughtiness.  Divine decadence in fact, embodied by our hostess this time around Bernie Dieter who invokes the ambience of a throbbing, decadent compellingly diverse Berlin, filled with compassion and high octane flirtation. From the opening the audience are warmly savaged by her demands.  She is impossible to resist, I dare you to try.  She sings throughout the night and her impressive full vocal presence is enthralling.

There was  a wide range of established cabaret and spectacle acts,  a charmingly bespoke juggling gent, two ladies who entwined with aerial hoop work, a beautifully abstract gymnastic contortionist  David Pereira who reminded me of a young Nureyev. His first appearance is a huge pair of wings and a shopping trolley, his second a fully naked body  shaving routine which is as sensually beautiful as it is lithely enthralling,  followed by a rather fit and sexy  Cyr Wheel cowboy.

These two thirsty lads are joined by Steven William’s doing his  ‘Bath Boy’  act, and what an act that is, Williams twisting and flying around like a demented sexy salmon, in skin tight soaking wet denims and with a twinkle in those devastatingly attractive eyes.  Watching this top notch gent at work I reflected on how much change La Clique actually unleased on the world of cabaret and how they continue to give an excellent line up, with the highest production values, so the whole things just feels intensely enjoyable, with some light transgressions from the wicked host and acts.

My favourite act of the night, doing a seriously impressive sword swallowing and most traditional fire eating performance was Heather Holliday, her personality as hot and spellbinding as the flames she’s enveloped in. Her act is a masterclass in sensually aware cabaret, highly skilled, polished and presented with just the right amount of threat and technological innovation. She was a joy to watch.  Audience, edge of seats, gasping and peeking through their fingers.

I love La Clique, it’s like visiting my naught Aunty and relishing her tales. This band of merry cabaret stars never fail to entertain, and although they may not quite be as shocking or provoking as they once were, and I’ve seen them many many times, to a first timer or someone revisiting a fondly remembered night out, they are astonishingly good.  My companion, a La Clique virgin was thrilled by the night, intoxicated by the ambience and fascinated by the range of performers,  singers and bodies twisted, bending and flaming on stage and just kept repeating ‘amazing’ over and over again between mouthfuls of hot buttered popcorn.  She was well and truly Clique-Popped.  The scintillating live house band featuring the astounding vocals of Kelly Wolfgramm seemed never to stop pumping out some seriously inventive new twists on old numbers which just adds another sumptuous layer to this super cosy night.

La Clique is the alternative Christmas show featuring the crème de la crème of the worlds of circus, comedy, cabaret, subversive performance and contemporary Vaudeville – serving up a night of laughs, gasps, naughtiness and the best in cheeky adult cabaret.

Worth kicking off your London Xmas festivities with a visit to the Speigletent and wandering off into the London lights feeling thrilled and with the festive message of host Dieter ringing in your ears and heart . She purred “We’re told difference is something to be afraid of. Here at La Clique we fucking celebrate it.’  that gets the biggest, loudest applause of the night. Warming indeed.