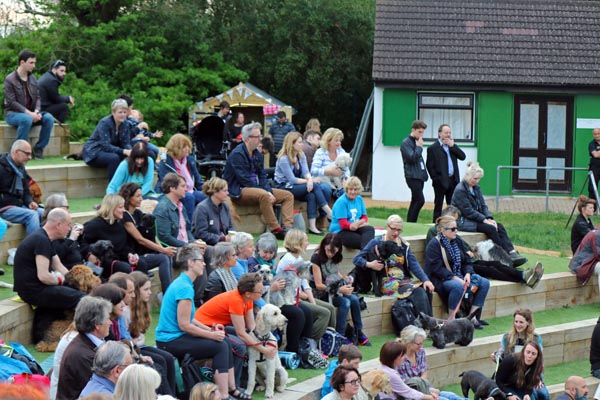 “Wouldn’t it be great if you’re playing a concert and you look out and everyone’s a dog”.
So mused Laurie Anderson, this year’s Brighton Festival guest director. She has gone on to make that dream a reality, with a full musical concert that has been especially tailored for the enjoyment of dogs.

Music for Dogs was first performed at the Sydney Opera House, and then went on to Times Square, New York. Interest in the subsequent Brighton showing proved so great that organisers had to add a second sitting, and on May 10 scores of dogs (and their humans) began assembling at the Brighton Open Air Theatre.

I took my two dogs, who were both entirely dumbfounded by the situation – as we sat along the amphitheatre style seating, dogs excited and slightly confused as to what was happening, it suddenly became clear just how unusual and surreal an experience we were about to have.

It’s hard to say exactly how many dogs were there, but with a venue which states a capacity of 425 people, and the sold-out show tickets stating ‘no unaccompanied humans (or dogs)’ it’s fair to say that there were at least two hundred. I don’t know if you’ve ever sat within such a large crowd of dogs, but even as a dog-lover I was slightly unnerved – there was a definite feeling that if just one dog decided that it wasn’t happy, everything could fast descend into absolute mayhem.

Luckily everyone seemed to get along aside from the occasional growl, and once everyone had settled into their seats Anderson took to the stage. As she began to play, the dogs became silent. It was fascinating to witness; the previously excited and restless dogs were quiet and relaxed, looking towards the stage and listening intently.

The 20-minute long concert mostly consisted of frequencies only audible to dogs, with some that could also be heard by the human ear. A combination of electronic sounds, different voice tones and an electric violin were used to perform the pieces, many of which were met with an enthusiastic reception of squeaking, barks and howls. The reactions grew in number and volume throughout the performance as Anderson brought all of the dogs together, as if conducting them into some kind of chaotic canine choir.

It was a magical show, and the eccentricity of taking your dog to a concert, which has been designed just for them, was a unique and bizarre yet wonderful experience for humans and dogs alike.

Brighton Festival continues until the end of May.