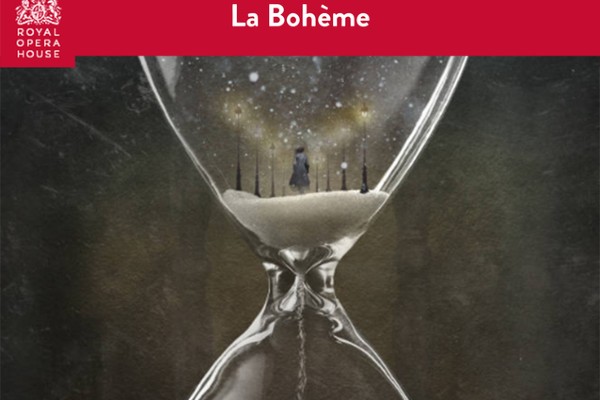 Richard Jones’ production has been revived by Julia Burbach with an attention to detail which is impressive,  capturing the blend of tragedy and comedy in La bohème, and providing an acute analysis of Puccini’s young would-be artists and their lovers, the soulful Mimì and spirited Musetta.

There’s a seriously stark opening to the production, the snow falls on a vast empty stage, ( it falls during the whole performance) then the attics slowly glides forward, all stark, bare and beams then one by the one the male leads arrive,  lank greasy hair, scruffy cloths but lyrical seductive voices. The set focuses all on the performers and I relaxed to let Puccini’s music roll over me.

There’s so little to work with on some of the sets, it makes the work of the acting so much harder, and then in the second half with the superbly spectacular designs by Stewart Laing of lavish shopping galleries of Pairs swirling and gliding around are breathtakingly lovely, jolting me out of the minimalist glaze, before disappearing off into the gloom once more.  Again the simple snow falls across the empty Barrière d’Enfer, we get the chill of an empty city at night.

You can read the synopsis here

Costume is technicolour late Victoriana or poverty greys and blacks and there are some delightful details in the dresses, capes and hats.  The ROH chorus delighting in both in full voiced singing and choreographed crowd mingling, they sounded majestic this evening.   Some of the most enjoyable parts of the production.

Charles Castronovo sings his lyrical Rodolfo with passion and commitment, bringing his obvious turmoil to the front and acts well. Simona Mihai (stepping in at the last moment) sings Mimi with a well-crafted perfection, she knows the role so well and it shows. Mimi is always difficult to portray to a modern audience with the right amount of pity and not too much pathetic neediness, Mihai gets the naive balance just right. Her Mimi is trusting, innocent and simple and the refined emotional power of that superb voice filling the auditorium.  Andrzej Filończyk’s Marcello is unpredictable and bullish giving a real jumpy energy to his performance. Jeremy White is a delight as landlord Benoit and brings a knowing wink to every note.

Aida Garifullina’s Musetta’s  warmth and charm seem subdued in this production, and although she’s in full control of her sexual power and drives the engine of her seductive abilities full speed over the daft and fawning men who surround her there’s a lack of agency to her.  She tramples across the tables of the Café Momus, throwing her silken knickers across the room and kissing a women, it’s all bluster and fun, the audience enjoying this intoxicated jealous vixen, but I lost the subtlety of her feelings here, the singing however, from Garifullina was perfect, with precise clarity of tone and beautiful musical timings Garifullina did what was needed her, to turn every head in her direction, raising much laughter and – when she wanted to-  owned the room.

Eddie Wade’s Alcindoro disappears in the folds of Musette’s dress, there’s too much going on with this feeding frenzy of lecherous men to pick out his bombastic misery. Garifullina and Filończyk have a believably passionate toxic energy between them, the heaving seething energy a delicious contrast to the delicate careful fragile coupling of Mihai’s Mimi and Castronovo Rodolfo. Their act 3 quartet a perfect counterpoint of desire and fears, anger and passion.

The café itself is very grand, busy, elegant and filled with toffs, not the kind of place one might experience a more rough-around-the-edges bohemian crowd perhaps.  The table of gauche lads and Mimi pushing into this rather splendid elegant dining room is never explored,  their poverty not contrasted and this continuing theme of a lack of reality to the struggles of these people in their day to day lives robs the production of any emotional authenticity which the music does its best to underpin.

We head back to the attic, Mimi comes back after the lads have indulged in some sexist graffitiing of their attic, there’s no bed, just some mankey quilt and perfectly horrid pillow to rest her fragile head against.  If she wasn’t already on her way out, that filthy pillow would have done her in.  Musetta’s care for Mini is also understated, so we read into her considerations what we can. They all stand and stare, ringing their metaphorical hands before off she pops, without anyone really taking much notice of her demise.  This slipping away surrounded by people who seem more invested  in their own upset than the actually demise happening next to them leaves an odd feeling and makes the final outburst of grief seem theatrical rather than heartfelt. The singing meanwhile continues to convince, and Musettas’ elegant grace in the face of wretched death bring a dignity to this miserable end.

The conductor Emmanuel Villaume brings real authority to the pit driving on the Orchestra of the Royal Opera House engaging us from the off and keeping the narrative tension just right, supporting the singers but also structuring the passion of this music so that we can get swept away into the luxuriousness of its depth and feeling, almost making up for the bare-bones and detachment on stage.

Sung in Italian with English surtitles