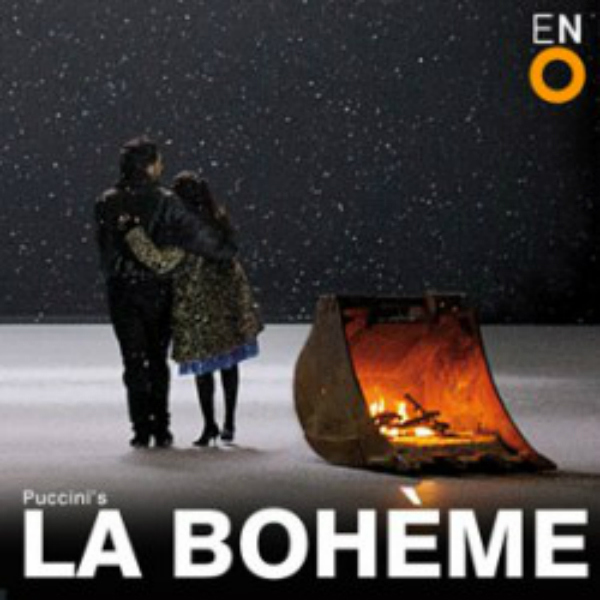 This is a brilliant new interpretation and a co-production with Dutch National Opera  of one of opera’s most timeless and unforgettable stories. This visually interesting, contemporary new production is from sought-after Australian director Benedict Andrews of the Young Vic’s award-winning 2014 production of A Streetcar Named Desire

Mini should consider changing her name to Mandy after this druggy gallop through Puccini, it’s a rather curious but entirely engaging outing of Benedict Andrews’ new take on La bohème. I’d missed the fact it was all new production and was expecting Jonathan Millers entirely presentable but utterly pedestrian outing and was pulled up rather sharply with this very modern hipster austerity take on La Boheme from Andrews.

Set in some almost Shoreditch cobbled together flat, with everyone crammed in to one space, stoned, pissed, chomping or slamming, it’s an eyes wide open stare into the hipster underbelly. With a mean grasping landlord not caring about anything other than profits and indulgence this chimes hard with a lot of people’s experience of scrapeing a living in London. With grinding borderline poverty, suffering the wretched cold, endless hunger and utter lack of hope only made bearable by alcohol and drugs the young talented people in this production rage against a system that keeps them out of the good life, but find their own ways to grasp joy.

I’ve always found Mimi irritating but this time she seemed to have more responsibility for her life and choices, – even when those choices are bad ones- and not so much a victim of the patriarchal anachronisms of her society. This Mimi is less broken butterfly floundering to death and more shattered innocent reeling from moment to moment. Director Andrews’s take, although not completely original, really works and the knowing glances as the strap comes out, the drugs heated up and the needle is passed and the gushing, over wrought  passionate lyrics no longer seem stalkerish and out of place, but fit into the scene well. I was surprised I liked it so much, but it seemed to make sense of Mini and the bohemian lifestyle rather than just working the way though the old Parisian clichés.  The singing helped, as did the young committed mostly American cast.

Zach Borichevsky’s mean, dark cynical Rodolfo was believable and just the right amount of easily disliked cad for this production although his voice faltered once or twice, but then it’s the first night and that will smooth out,  and Corinne Winters shone as Mimì. Pure, clean, shimmering with delicate control when needed and with serious passion in her voice, I was enthralled.  It’s always hard to get the acting right for Mimì, but this knowing, exhausted but still flickering with hope and grasping at raw straws of feeling was spot on.  I’ve watched Mimì die many times, often wishing she’d get on with it, but this time I was genuinely moved, her death, off to one side, abandoned, ignored, drugged and wretched saddened me and I left sobered by this waste of life.  Hep C, overdose or just hypothermia? the cause of death is uncertain, but it was  genuinely disturbing; more so for being off to the side of the action and not at the centre of it, an interesting call which worked well.

And then we have the rather hunky and tongue in cheek Duncan Rock’s Marcello, he’s utterly gorgeous to watch and quite the heart throb. Ginger, handsome, huge, wide, buff (sigh) and enjoys flashing his seriously hench muscles on stage, while fooling around like a rugby player. One minute doing pull ups, the next flirting in a tutu, genuinely funny. His huge vocal strength matching his big physical presence.  I left with a serious crush on him.  Rhian Lois’s Musetta is played with verve and Lois give her just enough caring brassy sass to make her real and bruised enough by her love to convince, an engaging performance indeed and she possessed the stage each time she sang.

Conductor Xian Zhang seemed a little flat although the orchestra supported the singers adequately, there were some (first night?) mismatched moments with the action on stage and  I didn’t feel it had the soaring passion that this Puccini needs to fly.

Amanda Holden’s translation is good but doesn’t go far enough in modernising the original, there’s some clunky bits which jar;  if you’re going to update then update and make it work well, leaving prayers and candles in a modern setting irritates. Can’t Mimi need a charger for her iPhone, can’t she dream about her next hit?  She’s been hanging around for drugs knowing Rodolfo will have some, although Director Andrews still leaves us enough feeling of these young folk being victims of a vicious system and unlucky circumstances rather than indulgent wasters.   Victoria Behr’s costumes are delightful, giving us a real contemporary feeling of retro cool Shoreditch all neon, spiv, fake fur and a rather delicious gold sequinned frock for Musetta.  It felt like an in-the-know happening night out in Bow…

The set is lovely, stripped down with some post-modern winks and although the slow waltz of a Christmas scene change at Café Momus was interesting to watch it also became a bit of distraction, although not at much as those irritating children. Opening Act 3 with some street walkers and wonderful atmospheric black stage with snow and real flames flickering in the discarded claw of a JCB digger worked to bring the drama back into the personal and intimate.

This was thoroughly modern Mandy driven Mimi looking like Scarlett Johansson in Under the Skin and it worked for me and for the rest of the audience. The enchanted full house loved it,  being very generous with their cheers and applause. My companion, a first timer at the opera was challenged out of his preconceived idea of opera in a good way and was delighted by the production, so a win for him too.

The ENO have taken a risk with this production and I could see some critics jiggling around with disdain, but it’s been a while since I’ve heard the coliseum audience being so pleased by what they have just watched, and it’s the first time I’ve really, seriously enjoyed and cared about Mini or the rest of la bohème.

Language: Sung in English, with surtitles projected above the stage

There are now at least 500 tickets at every performance at £20 or under. Find the right offer for you.