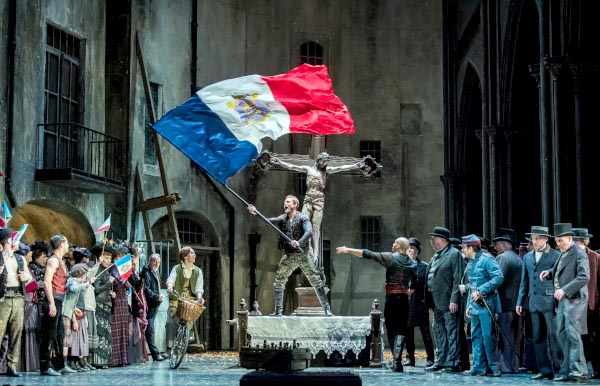 Disillusioned with life, the aged philosopher Faust calls upon Satan to help him. The devil Méphistophélès appears and strikes a bargain with the philosopher: he will give him youth and the love of the beautiful Marguerite, if Faust will hand over his soul. Faust agrees. Initially seeming to love Marguerite in return, he soon abandons her. Her brother Valentin returns from the war and is furious to find his sister pregnant. Will Faust repent his destructive actions, and can his soul, and Marguerite’s, be saved?

This is the fifth revival of Faust at Royal Opera House (ROH), but the first time for me, so fresh eyes on an obvious favorite for the audiences.

A last-minute  cast change due to illness saw Soprano Mandy Fredrich flown in – with a pretty seamless adaptation to the role of Marguerite – an onstage announcement that Erwin Schrott who was singing Mephistopheles was also feeling unwell made one think there was rather a lot of things going wrong on this opening night. We raised our eyebrow and settled down to the marathon first act.

I’m no great fan of French opera, but very quickly relaxed under the baton of conductor Dan Ettinger who brought the ROH orchestra to a purring powerful energy, engaging the music, underscoring the narrative and acting with just the right amount of emotional flex, allowing the music to flow and ebb before rising to the inevitable dramatic conclusions.

The three principal singers looked as if they’d been rehearsing together for weeks, Fredrich’s rich tones underscored the tender innocence of Marguerite progression and ultimate fall whilst never letting us forget her lack of agency. There were moments where I wanted her to soar, but perhaps considering she took over the role at the last-minute, she did an impressive job.

Schrott brought a rather cheeky authority to his role, with real warmth and bombastic charm, and hardly any sign of his sore throat, contrasting well with tenor Michael Fabiano whose rich lyrical voice filled the auditorium and pleased the full house.

The chorus were on full form, having as much fun as possible without smiling and giving power and diction to the contrasting passages, jingoistic or catholic, at the best, they are convincing to hear and interesting to watch. I adored them.

Gounod’s Faust is curious, heaving with melodrama, overflowing with toxic masculinity and utterly bonkers in parts, but then it’s an opera about struggle, desires and vanity reflecting the time of its writing and also, it’s setting.  The opera reflects these dichotomies in a crepuscular campiness of quite gothic proportions. The lurking sets, strike the most decayed decadent pose keeping the eye focused on the action and Charles Edwards’s designs are superb. Choreography and dancing combine in some impressive atmospheric large cast set pieces which unfold with a precise and natural feeling.

With a troupe of acrobatic dancers who double as sinister, lithe and insectile demons, and a trio of ballet numbers there’s plenty to watch as well as listen to. David McVicar’s original production set in Paris during the Second Empire does very little to flesh out thinly drawn characters and this revival by Bruno Ravella seems to stick rather close to what is, after all, a much-loved production. The dancers echo the sordid decent into destitution with some genuinely creepy ballet and give a sombre terror to the death of Marguerite’s child.

This was an exercise in high camp done with a deftness of touch from conductor Ettinger which gives the music a serious emotional heft regardless of the sometimes daftness being played out on stage. Schrott’s Mephistopheles followed this lead giving us a gloriously tongue-in-cheek delight to his acting and allowing some humour to reflect off the glittering darkness of the narrative.

Standing surrounded by sensuous posed and gilded famous queens of history and decked out in a huge cape – before throwing it off and exposing himself glittering in an exquisite jet black rhinestoned ball gown, there was a hint of – dare I say it – Rocky Horror about Schrott’s divine and exquisite self-adoration in the role, rescuing it from serious interpretation, allowing his carefree wickedness to flood the stage.