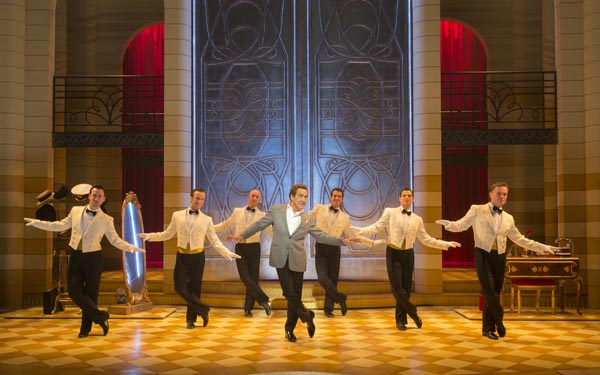 Dirty Rotten Scoundrels opened at the Savoy Theatre to good reviews in March earlier this year.

If ever a show was suited to the theatre it is playing, it is this production, staged in the magnificent surroundings of  the Savoy Theatre.

Howard Harrison‘s clever lighting brings the Art Deco set, designed by Peter McKintosh to life, creating a visual feast on stage while allowing you to sit back, relax and enjoy the production, which is visually stunning.

Based on the 1988 film of the same name starring Steve Martin and Michael Caine, the present musical comedy (I personally prefer to think of it as a comedy with music) was premiered on Broadway in 2005. The book is written by Jeffrey Lane with music and lyrics by David Yazbek whose other Broadway credits include The Full Monty and Women on the Verge of a Nervous Breakdown.

Following the sudden departure of Rufus Hound’s last month from his role playing Freddy Benson the shows producers took the opportunity last week to introduce to the press his replacement, Alex Gaumond, fresh from playing bossy Miss Trunchbull in Matilda at the Cambridge Theatre along with Bonney Langford and Gary Wilmot who joined the cast in September.

Lawrence Jameson (Robert Lindsay), a smooth, slick conman installs himself every summer season in the beautiful resort of Beaumont-Sur-Mer, on the French Riviera where with the help of the local Chief of Police, Andre Thibault (Gary Wilmot), they strip wealthy women of their riches. Then, along comes Freddy Benson (Alex Gaumond) a young brash American spiv, who wants a bit of the action.

Lawrence agrees to let Freddy be his protege against the better judgement of Andre Thibault, the Chief of Police and between the pair they both, try to scam American Soap Queen, Christine Colgate (Katherine Kingsley) out of $50,000, but ultimately fail as they allow romantic feelings to get in the way of a good scam. It’s all glorious knockabout nonsense.

Lindsay’s last performance in musical theatre was 16 years ago, playing Bill Snibson in Me and My Girl which earned him an Olivier award for the London run and a Tony when he transfered to Broadway. He breezes through this production with ease, but it was well into the second half before I decided if I was enjoying his performance. His camp manerisims and asides could well irritate an audience but the longer the performance continued the funnier it all became. He clearly won me over, I enjoyed his performance and the character he created very much.

In replacing Rufus Hound in the role of Freddy Benson, Alex Gaumond had big shoes to fill. He plays the ‘loveable fool’ which gets you onside very quickly but his gangly posturing sometimes looks odd next to Robert Lindsay’s more contained and measured moves. He has a huge presence on stage, sings his numbers very well, but never overshadows or takes the spotlight off Mr Lindsay. The pair completement each other perfectly and their comic timing is impressive. A marriage made in heaven perhaps!

Katherine Kingsley plays millionaire soap heiress Christine Colgate to perfection, bringing light and shade to her interpretation of the role, one minute vulnerable the nest bold and brassy, but always slightly odd. She has a great voice and the audience really warm to her. She is very convincing in the role and afterall, I did not see the twist to the plot coming at all.

The revelation of the evening for me was Bonnie Langford playing Muriel Eubanks, a role made in heaven. Bonnie dances her way through the evening with style and is glorious when she gets down and dirty with The Police Chief played by Gary Wilmot whose casting and French accent left me slightly unmoved until well into the second half of the show when his dalliance with Bonnie Langford took centre stage. The balcony scene after their night of passion was one of the funniest moments of the show.

Special mention also for Lizzy Connolly whose rendition of “Oklahoma” creates one of the memorable highlights of the show.

David Yazbek’s score lacks any obvious show stoppers but my toes were tapping for most of the evening as the musical numbers complemented the nuances of the fast moving storyline.

Dirty Rotten Scoundrels is a delight and shines on all fronts with something to offer to everyone. The sets are perfect, as are the costume designs while the new team of Lindsay, Langford, Wilmot, Kingsley and Gaumond will guarantee this show runs for a long time to come.

Often when returning to Brighton on the train after seeing a West End show I am flagging and tired. Not this time. I felt quite uplifted. I had enjoyed a wonderful evening out watching a wonderful show in a beautiful theatre.