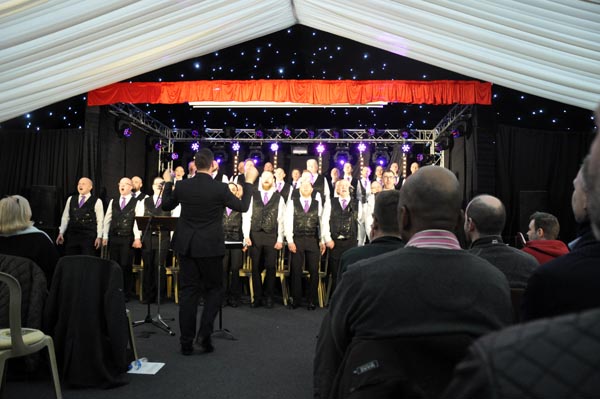 Brighton Gay Men’s Chorus performed a Tribute Concert to celebrate the life of their friend and colleague Pablo Fernandez Arias Carzola at the Phil Starr Pavilion on Sunday, February 5.

The tribute concert took place during Soul Safari, organised by the Village MCC Church lead by Rev Michael Hydes and part of the B RIGHT ON Festival which is taking place during LGBT History Month.

Pablo killed himself in late December while suffering from depression following being diagnosed with ME.

It was a wonderful uplifting experience to be in the Phil Starr Pavilion, surrounded by all Pablo’s friends, but not feeling at all uncomfortable with hearing the circumstances surrounding his decision to take his own life. Discussing mental health for many can be uncomfortable, but just listening to the speakers talk with honesty about the reasons why Pablo came to his personal decision, was I am sure cathartic for many people attending.

Pablo’s life ended at the bottom of Beachy Head. Each of the speakers Sarah Hill, Jeremy Marks, Rev Michael Hydes and Marc Yarrow did not ignore this fact and spoke beautifully about their memories of this warm, lovely man. We were even treated to a recording of Pablo singing in his first language, Spanish. It was very powerful stuff and must have been particularly reassuring for Pablo’s husband Andrew Mapstone to know that Pablo was loved deeply by everyone in the chorus.

The musical numbers were carefully chosen to push our emotions to the limit; Chris Baker’s interpretation of First time ever I saw your face was haunting and poignant while Adam Betteridge and Nick Ford perfectly captured a deep, melancholic emotion in their duet, Can you feel the love tonight.

The chorus performances of Nature boy, Wind beneath my wings and Hallelujah where perfect song choices for the occasion while their rendition of Whitney Houston’s One moment in time, created a collective outpouring of grief from the Brighton Gay Men’s Chorus who somehow managed to hold themselves together while giving new meaning to many of the lyrics in this popular classic.

Mental Health has for far too long been talked about in hushed voices while many people continue to suffer in silence from the stigma that surrounds the issue.

It was so refreshing to witness and be part of an honest tribute to a man who took his life because he was depressed and to hear his friends explain with honesty the circumstances around that decision.

The chorus performed under their Musical Director, Marc Yarrow while accompanist Tim Nail’s choice of the opening piano prelude, beautifully set the tone for everything that followed.

A collection taken at the end of the service for the work of MindOut the mental health service run by and for LGBT+ people raised £417.44.