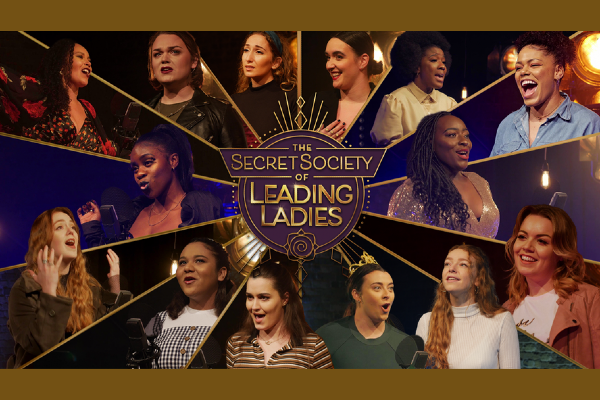 Ryan Carter and the creative team at Cirencester’s Barn Theatre have created a musical treat you couldn’t ever see in the real-life theatre .

Some 14 musical theatre divas have been assembled in a show where  you the audience control the structure of the performance. Here’s how it works. Use your imagination. The singers have been invited separately and anonymously to perform on a bare stage.

When you sign up for the show you are initially presented with a choice of 3 unnamed singers, and the title of a musical and a specific song. Click on your choice  and she sings ! During the show you get to choose 5 times and cleverly edited clips of dialogue link the action. The finale presents all 14 singers in “ Big Finish “ from the tv made-up musical Smash.

The technology works really well, and if you buy a 24-hour ticket you can get to watch all 14 singers – which I calculate takes just 3 viewings – and as the show is 30 minutes long, that’s not such a trial.

There are safe choices and adventures – I probably chose safety, but I got one or two surprises.

I’d Rather Be Me, Somewhere Over The Rainbow, The Last Midnight, The History Of Wrong Guys and Nothin’ Stops Another Day.

Prior knowledge and deep study of the online programme allows you to work out who the singers are – because  the drawback for me was that they’re not named – simple captioning would solve the problem, guys.

So subject to correction here’s who I think I heard and how they performed .

Allie Daniel gives a strong  mean girl, don’t -mess-with-me opening statement in I’d Rather Be Me when she sings: “ Every arsehole has opinions; that doesn’t make them true .”

In my choice, she was followed by Kayla Carter, who gave a sweet, innocent song of hope and need with Over The Rainbow – worth it for her great final note. The highlight of my selection was Aisha Jawando as Sondheim’s Witch in The Last Midnight. Feisty, full of attitude, a little bit manic she rolls her eyes heavenwards and she’ s spot-on when she sings: “ I’m not good, I’m not nice – I’m just right”.

Next, I’m not 100 per cent sure, but I think it was Aoife Clesham  singing a sad ballad of making  a repeat mistake in Kinky Boots’  The History Of Wrong Guys. She’s feisty, angry with herself ,  full-throated , cynical, vulnerable. It’s great

Abbi Hodgson ( I think ) gives us a sad ballad about life – or rather death – in  the ghostly Nothin’ Stops Another Day . It’s haunting, lyrical, thoughtful .

The final treat is to see the women you ignored in your choices in the 14-strong finale – smash -hit Big Finish.

Altogether a great musical treat and one that could be longer – but buy a season ticket and you can hear all 14 Leading Ladies.

Tickets available until 7 March at barntheatre.org.uk