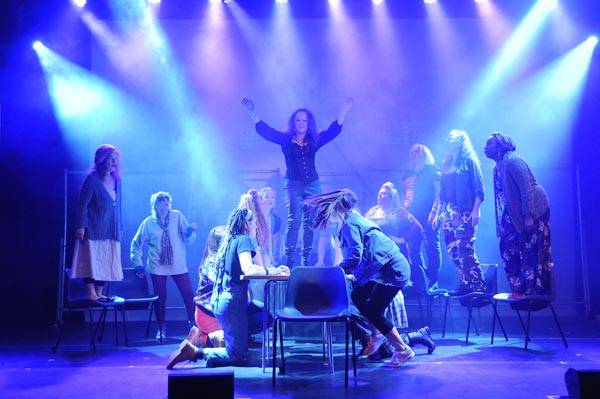 Bad Girls the Musical is based on the iconic TV series Bad Girls first broadcast in June 1999, highlighting life in the fictional women’s prison HMP Larkhall.

It’s a story of how good triumphs over evil and deals with serious issues such as drug abuse, bullying and lesbian relationships.

New wing governor Helen Stewart elegantly played by Colette Ridehalgh is a reformer and determined to rid the prison of bad guy prison officer Jim Fenner played with slimy assurance by Frankie Davison who has a great lyrical singing voice.

Fenner who believes he has been unfairly overlooked for the role of the new wing governor takes new inmate Rachel Hicks (Amy Lawrence) under his wing and abuses her causing her to take her own life. Fenner and his side kick Sylvia ‘Bodybag’ Hollamby gloriously played by a confident Sharon Starr wants the new governor out of the way so that Fenner can take over the job he thinks is rightly his. That basically is the plot.

First and foremost Bad Girls is a show about strong women and how they survive their time in prison. This production celebrates those women with some inspired casting of the principle roles.

Jaki Pockney is spectacular as gangsters wife Yvonne Atkins while Sophie Graffin (Shell Dockley) has all the necessary qualities to be top dog.

Brighton Theatre Group last produced this show six years ago and Jo Barnes (Julie Saunders) and Emma Lindfield (Julie Johnston), the two Julies, return to reprieve their original roles and between them, almost steal the show. They are confident, funny and Jo Barnes’ performance of Sorry, sung to her son David on the telephone, was a highlight of the evening for me.

Most musicals have a single number you go away remembering. Bad Girls The Musical as such does not have a show stopper but it does have half a dozen big numbers that are very memorable and beautifully crafted by composer Kath Gotts.

Michael Burnie’s direction throughout is tight keeping the focus on the characters rather than the spectacle. Ellen Cambell’s musical direction is first class and the backdrop projections creating the inside of the prison are particulary effective.

Bad Girls the Musical deals with difficult subjects and really does them justice. At times it is very dark but this after all is real life and its success lies in the writers managing to successfully engage you with the characters.

The first half of the show suffered from first night nerves from some of the performers, but they all came into their own during the second half when they relaxed, started enjoying themselves and sang gloriously.

Special mention for the chorus and especially Ann Atkins who took their roles very seriously, danced very well and kept me amused all evening.

Well done Brighton Theatre Group for taking on a serious show with a serious message and giving us something to think about. Well worth the visit.