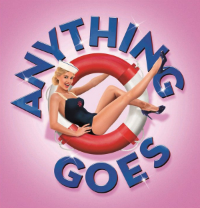 Anything Goes by Cole Porter

This updated and sequined marvel of a show, with music and lyrics by Cole Porter and taken from a book by P.G Wodehouse, is running in the comfortable Congress Theatre at the moment and features a full orchestra and a talented cast of 26. Porter’s uplifting masterpiece of song and dance features songs such as I Get a Kick Out of You, You’re the Top, It’s De-Lovely and Anything Goes, which are well known and loved by many and mostly honoured in this production.

From the moment the show starts we were transported to the magical age of tap dancing and high society with the whiff of mania and the threat of financial collapse. The plot seems much dafter these days than when it was written by Mr Porter. Then it was a savaging of the shallow values of the day, but its naughty content now comes across as twee and sweet, even in Eastbourne.  It’s a lovely comedy of manners and love story wrapped around the protagonist Billy Crocker’s discovery that his heart’s desire, debutante heiress Hope Harcourt is engaged to an English aristocrat. He stows away aboard the S.S. American to win her back.  Billy is aided by a string of eccentric passengers on board the luxurious transatlantic liner and he tries with the assistance of a fake Pastor to untangle this web of love before they reach Southampton. We’ve all been there…

So we hopped aboard and enjoyed the set and lighting, decked out as a stylish liner and using some neat swift changes of scene and some pretty smart lighting effects to change the tone and focus of the action. It’s a pretty good night of sassy heroines, mischievous mob bosses and tap-dancing sailors but does seem somewhat forced high-jinks on the high seas on occasion, but this is as much a fault of the plot as of the action. The narrative thrust is relentless and this is often at the cost of emotional development of the characters, and when played at fast, staccato tempo this works well, a relentless chop chop chop of vignettes, silly asides and swift changes. This is how Porter meant it to be seen.  This production mainly keeps to his notes, particularly when the whole cast are on stage dancing or singing. These stylish and energetic ensemble chorus pieces are when the show truly shines and works the best. Where it stumbles is the change of tempo of some of the songs to suit a singing style alien to this musical; this is a pity and detracts from the show. Debbie Kurup (The Bodyguard, Chicago, Sister Act) has a lovely voice and sings well, but it’s wrong for Porter’s clipped, uber-fast delivery. However, her acting is vivacious and engaging (I suspect most folk aren’t up to speed on their Cole Porter so won’t notice, I did, it irritated.) and Matt Rawle (Les Miserables, Miss Saigon, Evita) nuzzles up to her style and keeps the crooning going, again a great voice just not a Porter voice. However when they dance and sing together the whole thing comes together and they shimmy and glow and the musical jumps a beat and comes alive again.  The whole supporting cast are good, the show is electric when they are all on stage and the night is one of sophisticated glamour.

This is not an easy musical to stage. The jokes are almost eighty years old, although brilliantly written, and the history is a blur to most folk; this is a huge pity, as Porter is as savage in this seemingly frothy nonsense as he ever was, spearing American society with his talon-sharp wit and hanging out the pretentiousness to dry. The cast also includes Hugh Sachs,  known to TV viewers as Gavin in ITV comedy Benidorm, and Jane Wymark, who played Joyce Barnaby in Midsomer Murders. There are plenty of clowning moments and fun asides, although some of the more obvious comedy songs fell a bit flat and some of the ethnic stereotyping is of a long-ago age. It’s a blur of movement and everyone gets a chance to shine, with some tongue-in-cheek straight-to-audience moments that always please.

You can watch the original film with the wonderful Ethel Merman and Bing Crosby here; made in 1936, it’s a camp delight!

Other than the adjustments of tempo to suit the singing styles of the main leads, this is a strong production and a fun tour. Musical snobs like me might huff and puff a little at these modern interferences and changes (and Mr Porter would have very very slowly raised an eye brow and insisted the ‘talent’ kept to the score) but I was also transported by the ensemble dancing and singing The choreography from Alistair David was outstanding and the planning and accuracy of the dance impressive.

It’s highbrow and lowbrow married together beautifully and Porter’s wonderfully clever puns, rhymes and lyrics are mostly allowed to shine out and dazzle.

The Congress Theatre is on Eastbourne seafront with good prices on their seats, free parking and a very reasonable bar. It’s well worth the delightful trip out.