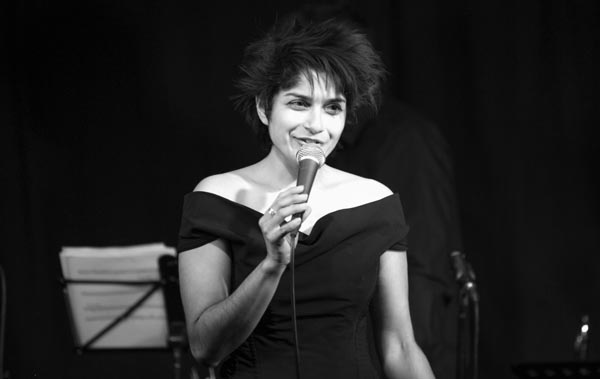 To many locally, Aneesa Chaudhry is best know as musical director of the Rainbow Chorus, Brighton’s only LGBT choir.

ON SUNDAY night (December 7) at the Brunswick in Hove she showed the audience exactly how accomplished a musician, singer and performer she is. The Brunswick was packed to the rafters with friends, supporters and singers from the Rainbow Chorus who created a warm, supportive ambience, giving Aneesa the ideal opportunity to showcase her impressive vocal talents. I could have listened to her sing all night.

During her set she sang trad jazz, swing, mainstream ballads, songs from the shows and Asian fusion numbers. She is the full package helped along by her sassy looks and engaging chit chat.

She was clearly more relaxed in performance with the songs accompanied by the musicians from Bliss Art (Mojca Monte and Jana C. Amali) who she works with regularly, but the numbers she sang with the Jazz Band showed her musicianship off at its best.

In I Could Have Danced All Night and I feel Pretty her voice became another instrument among an ensemble of jazz instruments, while during the jazz standards The Look of Love, Take Five and Route 66 she allowed each player their solos and a chance to impress alongside her vocals.

The haunting Tera Chera was the highlight of the set for me showing off her range and the ethereal tone quality of her voice in the upper register.

Guappa Chica presented her fun side while Paper Nut demonstrated the huge range of her voice and sounds she could make with it. Vocally she was quite extraordinary during this number considering this was live and the possibilities of studio tricks less possible.

I love a performer who takes risks not only with their performance but also with the arrangments. She made My Funny Valentine her own with a wonderful arrangement that challenged both singer and listener to the limits. It was a triumph!

Her voice is secure over her complete register, while her ability to bend notes gives at times a wonderful Eastern flavour to her delivery. Her articulation is drilled down and precise. You can understand every word she sings and this was shown off to its best in the scat sections of the tradition jazz numbers which were electric and percussive.

However, the ‘big gun’ she brings to every performance is her phrasing. It is instinctive and musical. She could sing the telephone directory and make it sound interesting and fabulous.

All the musicans did a great job but I have to make special mention of the percussion player Satin Singh who made his drums sing. His musical contribution to the evening was very special especially during the Asian Fusion numbers as was Jana’s playing of the Indian flute.

Considering at times there were eight musicians playing on stage in this small room, the sound and balance at all times was excellent.