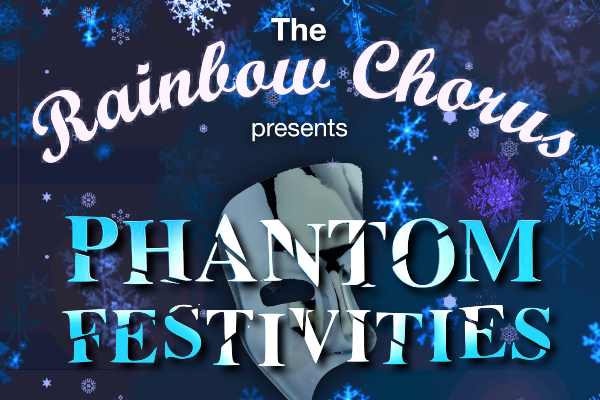 Rainbow Chorus dished up a sumptuous table of musical delights in their Phantom Festivities concert at the packed-to the rafters St George’s Church, Kemptown.

Led as always by the energetic, enagaging and charismatic Aneesa Chaudhry , the choir was augmented at times by its RC+ workshop members- people who are trying out singing and not necessarily oven-ready for performance. But the workshop members proved one of the delights of the evening.

Opening with a delicious O Holy Night, they presented a new offering – the Rune Carol , which combined Viking darkness and cold with a totally pure Christmas feel. The audience’s first chance to join in was Winter Wonderland and they (not me) were in fine voice.

A smaller group within the choir gave us I Wish I Knew How It Would Feel To Be Free, a Nina Simone classic which they sang with a heavy lean towards gospel. The top notes were challenging and probably need a re-visit.

The first highlight for me was their rendition of Libera Me from Faure’s Requiem, with a bold, clear and well-delivered solo from Ali Campbell. Then came the “ sprout” moment in the meal – a reworking of the 12 Days of Christmas , which was laboured and long in the audience’s learning and though a clever take with its “ four silver queers…5 Kemptown queens…and 12 Gscene issues” , it did slightly out-stay its welcome among those of us oldies at the back. That said the huge majority of the audience loved it and took a big helping of it.

Finola Brophy, ex-chair of the choir gave a heartfelt and loving tribute to our late editor James Ledward, whom she described as “ a true legend…who gave so much with a huge commitment of time and energy to the Brighton lgbtq+ community. He challenged but also found positive outcomes , respecting differences and diversity “

The choir’s tribute to James – a fusion of I Love You and What a Wonderful World was perfectly paced and sung with emotion. Two further audience sing-alongs led to other delicacies, including a wordless and meditative Letting Go, written by Aneesa herself.

Their signature True Colours carried its usual emotive impact and an un-festive medley from Phantom of the Opera brought the night to a close with two well-received encores of the Rune Carol and Vivaldi’s Gloria which they hit for six with every note.

Anyone wanting to venture into singing can attend their workshop on 11 January at Dorset Methodist Church, more info here, and the choir will be onstage again in July in their summer concert.