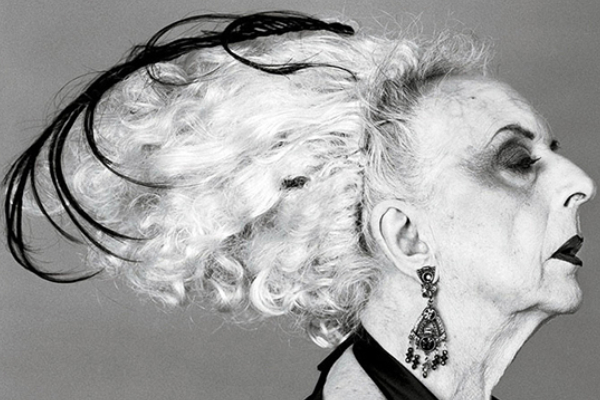 Quentin Crisp was something of a legend in queer history: a sometimes controversial writer, raconteur and actor, who died 20 years ago – in November 1999. The following interview took place during the Brighton Festival of May 1985 just before he went on stage at the Theatre Royal.

Q. What have the audiences been like so far?

A. Very relaxed, friendly, cosy – no hostile remarks, which is remarkable when you think they can say anything… I’ve only had about a dozen questions calculated to embarrass me, perhaps another dozen which are openly hostile: saying “Who the hell are you?” and “What gives you the right to stand up there and tell us what to do?” – which is legitimate because, after all, if I’m saying “Question me”, I can’t say “Ask me nice questions”! They’re free to ask me any questions …

Q. Is it true that you weren’t intending to come back to England, ever?

A. I think it’s possibly not a good idea for me to come back to England, because Mrs Thatcher is forever asking me for money……

I live in one room on the Lower East side of New York, in exactly the same way as I lived in England. Of course, it’s five times as expensive, because America is very expensive to live in. My room in England was £6 a week – that’s about 13 dollars. My room in America, which is smaller and colder, is 65 dollars a week…. And I live in a district where there are people lying on the pavement outside the house.

One characteristic of New York is that the splendour and the misery are woven together in a way that they’re not in Los Angeles.  In LA you only see the beautiful and the rich. It’s a bit harrowing inasmuch as you are sitting in a perfectly ordinary restaurant and there are people with their noses pressed against the window panes trying to make up their minds whether to ask the management for… the scraps off other people’s plates.

Q. How do you spend your time in New York?

A. If I’m in, I eat in and I try to spend at least one day a week without going out of the house – because if I didn’t, how would I recharge my batteries? There’s no way, in America, of just darting down the street to buy some milk. And the moment you’re out of doors, you’re with the world. Everybody is your friend. People talk to you, they want to know your opinion.

Q. You say you don’t believe in equality, you believe in individuality. Would you not agree that those people who fought for equal rights for gay people, against (historic) homophobic oppression, played an important role in the acceptance of gay people?

A. First thing to say is: I want the gay community to achieve its aim. I understand that what they want, they desire not only for themselves but for others, and this adds a certain altruism to their life’s work. I do not doubt their zeal, but their method. It is in the nature of integration that you cannot fight for it…. If you nag the world enough, in the end it will say “All right, you’re integrated”. That’s useless. The only weapon on the side of integration is boredom.

Q. But many gay people now are very frightened to come out – especially in the context of  HIV/ AIDS. What words of advice would you give them?

A. The question most often asked is: “Should I tell my mother/parents/the world?” And of course the answer is: “Never tell your mother anything”: that’s the first essential. Your parents are not your friends.  To your parents, you are only an ambassador, never a person. And secondly, if you tell them about your private life, what are they supposed to say? – “My dear, how terrible for you!”, or: “I congratulate you”, or: “Don’t tell your father”? …  If you want anyone to know anything about you which you think they won’t like, you don’t tell them. You go on as though they already knew.

I had two other brothers. One didn’t go into the fertility racket; the other did and he had two daughters. And I had a sister and she had a daughter.  So, if my mother cared about those things – but she never said – then she’d have thought: “Well, I haven’t done badly”.

Q. You believe in self-exploration – what you call “the journey into the interior”.  America is known for an obsession with psycho-analysis. In Britain, counselling and therapy have become increasingly in demand. What’s your opinion of this?

A. They’re a terrible mistake. All psychiatrists are charlatans. They never say anything useful. The idea is to get you to spend your money and you sit in the chair and speak and speak and speak, while they say “Mmm. Mmm”……

Q. So your journey of self-exploration is something you have to explore yourself?

A. You’ve got to do it yourself…. If people say: “I never feel I’ve had from Life what I deserve”, then you have to say: “What do you feel you deserve?” This is what I’ve always endeavoured to do – when people speak to me or write to me or telephone me and say (for instance) “I can’t stand another minute (in a relationship)” and so on. And I say “What is the worst that could happen?”….

Q. Would you say there is an irony, a contradiction between your own idiosyncratic style and your status now – as a kind of national hero or guru, embraced by mainstream society?

A. It’s come bit by bit. People say: “You’ve changed” and I say “I’ve only changed in the way that anyone would change. I wear less bizarre makeup – a woman would wear more bizarre makeup at the age of 17 than at 77, it’s a natural process”.  And apart from that, I’ve done nothing – the world has come to meet me, and I’m delighted.

What worries me about the gay scene as it’s called, is that they seem to want to enter another ghetto. In Chicago there are bars where, on the wall, it says ‘Do not wear any cologne of any kind, do not wear deodorant’… That’s discrimination – it’s no different from when your mother said: “ I wish you’d get your hair cut”.

Q. Do you believe that, if you were young today, and despite the wider social acceptance of gay women and men, you still wouldn’t fit in? Would you still feel like an outsider?

A. I think I would admit that – because, though the world would take no notice of the fact that my hair is blue, the gay people do want this ghetto. My problem was never a sexual one – I never sat in my room thinking “I’ve got to get a man from somewhere”. I wanted to live all the aspects of my life …You don’t have to justify anything!