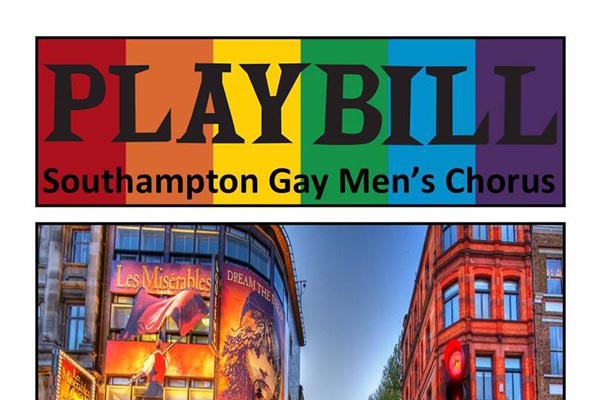 Southampton Gay Men’s Chorus (SGMC) will showcase their talent while celebrating the rich diversity of musical and show tunes for their Autumn, 2017 production.

For their Autumn, 2017 production SGMC have chosen to showcase their talent and celebrate the rich diversity of musicals and show tunes.

Out on the Town will take centre stage on Saturday, October 7 at the Hub Theatre, Southampton City College, St Mary’s, Southampton.

Whether it be up the West End or further afield on Broadway the chorus will continue to celebrate the ‘50th Anniversary of the Partial Decriminalisation of the Sexual Offences Act’.

New musical director Simon Irwin, said: “I’m so excited that my first concert conducting SGMC will see us explore the fabulously rich and varied heritage of music from shows new and old. There are sensitive ballads, great rock and pop tunes, right through to those rousing songs that stop the show. Who doesn’t enjoy losing themselves in the world of musical theatre, with its fun, drama, and of course a rainbow of colours?”

SGMC was founded in 2012 with the aim of bringing gay and bisexual men together to sing perform, socialise and raise money for local charities and now have an active membership of over 30 men of all ages and abilities.

They’re always looking for new members of all abilities who love to sing and there is no audition to join them.

Future events this year include their Christmas concert in December in partnership with Flautissimo, Southampton’s flute orchestra and a LAGLO ( Lesbian and Gay Liaison Officers) launch event at the London Hotel, Terminus Terrace (Oxford Street), Southampton.

Event: Out on the Town with Southampton Gay Men’s Chorus

For up to date information about the chorus, click here: