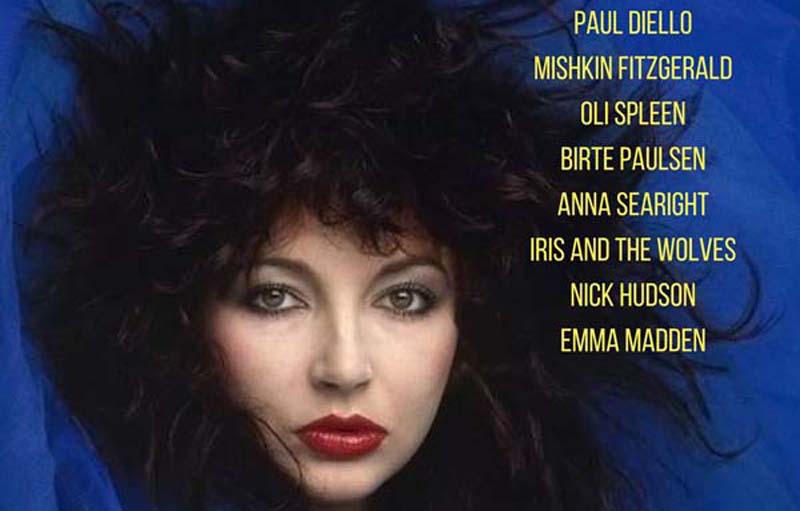 Brighton’s best musical acts come together to pay tribute to the amazing music of Kate Bush in a multi media evening of Kate filled entertainment.

Paul Diello – Award winning singer/songwriter Paul Diello has released two solo albums, toured across the UK, Europe and America and has supported artists such as Texas, Jarvis Cocker and Nick Harper. He won best solo artist at Brighton Music Awards 2010 and has just completed a run of three sold out, 5 star reviewed shows for Brighton Fringe Festival as well as receiving a nomination for the LGBT Fringe Award. Paul has performed at many festivals across the UK and America in 2015 he opened the show on the main stage at Brighton Pride Festival.

Mishkin Fitzgerald – Mishkin Fitzgerald is best known for her role as lead singer and pianist in the British ‘orchestral punk-rock’ band, Birdeatsbaby. However, as a solo performer she plays darkly tinged pianos ballads and melancholic alt-pop tunes. Daughter of a church minister and a maths teacher, the young singer was influenced heavily by classical piano music and opera, and then later alternative artists such as Nick Cave, Patti Smith and Kate Bush. She has created a sound that is distinctive, fragile and unapologetic.

Oli Spleen – Oli’s former band The Flesh Happening were banned from several Brighton venues for their abhorrent behaviour (you’ll have to ask him yourself!) but his current band, Pink Narcissus, have swapped the confrontational stance and bare-bones garage rock for a diverse form of punk metal, albeit with agonisingly confessional lyrics. Oli will be singing solo with piano accompaniment from Mishkin Fitzgerald.

Iris and The Wolves – Classically trained chanteuse Fiona Wallace started out as an opera singer before putting together indie/alternative/melodic pop act Iris and the Wolves in the early 2000’s. The band became a prominent feature in the Brighton music scene and began work on a debut album but disbanded in 2011. Since then Fiona has been focusing on motherhood and fronting the successful five-piece covers act The Double Zeros. Tonight sees the return of Iris and the Wolves on stage for the first time since 2011.

Anna Searight – With a distinctive voice and an emotive guitar style, Anna Searight approaches singer-songwriting in a fresh and unique way. Combining classic songwriting with a haunting voice, her hypnotic melodies reflect influences of artists such as Tracy Chapman, Elliott Smith and Thom Yorke.

Birte Paulsen – Inspired by Folk, Chanson, Americana and Scandinavian eccentricity, Birte Paulsen delivers dark Indie Folk with a sigh of Nordic melancholy. Her debut album Borrowed Time, has brought together some of the UK’s finest musicians and has been praised as “A rare sort of success, and superbly intriguing – if Portishead took a foray into folk music”.

Nick Hudson – Nick Hudson is a composer/musician/artist based in the UK and founder member of The Academy Of Sun, a democratic unit sinuously augmenting Nick’s compositions in the form of a queer, gnostic, post-punk orchestral militia. The Academy Of Sun are currently manifesting a colossal piece of work in the form of an album called Codex Novena.

Emma Madden – It’s a rarity to find Emma without bleeding fingers after a show, as she sings until her neck tendons are raw and her fretboard bloody. Though this sounds like the bio for a death-metal band, Emma is anything but. She demonstrates the brutality behind gentleness and honesty.