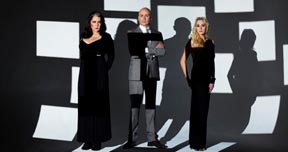 Exactly 33 years since their greatest hit of all time The Human League are performing at the Brighton Centre on Friday, December 12.

THE HUMAN LEAGUE, one of the most influential pop groups of all time, are undertaking the Alternate Universe (AU) Tour – a 14-night nationwide tour of the UK at the end of this year.

The AU Tour hot-foots off the back of the band’s chart hit earlier this year when Don’t You Want Me re-entered the UK Top 20 following mammoth public demand from a social media campaign.

Comprising of long-standing band members, Phil Oakley, Joanne Catherall and Susan Ann Sulley, the tour highlights the influence and popularity of The Human League and follows public demand for them expressed in a social media campaign earlier this year which resulted in the re-release of Don’t You Want Me Baby.

The AU Tour is significantly timed, kicking-off exactly 33-years to the day since The Human League released their best-known and most commercially successful hit, Don’t You Want Me. In 1981, the track became Britain’s Christmas No1, remaining the most successful Christmas hit ever and has since sold over 1,560,000 copies, making it the 23rd most successful single in UK Singles Chart history.  It later topped the Billboard Hot 100 in the US on July 3, 1982, where it stayed for an impressive three weeks.

The Human League have had four Top 10 albums and eight Top 10 singles in the UK; as well as two US Number 1 singles and have sold 20 million records Worldwide.

The avant-garde synthesizer based band are still pioneering the current sound in the music charts to such an extent that a new generation of synth-driven female pop artists have been labeled as the ‘L’ girls.

La Roux is a known admirer of the electro pioneers, while Little Boots is such a fan that she requested Philip Oakey’s input on her debut album. Even Lady Gaga is openly proud to be a professed devotee.

Spanning five-decades of chart history, The Human League are masters of musical and cultural influence; laying powerful past foundations whilst simultaneously forming the shape of ground breaking current and future talent.