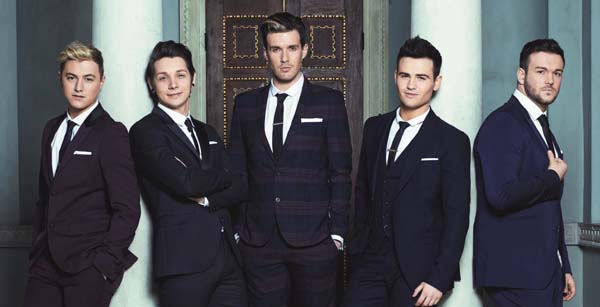 Collabro, the World’s number one musical theatre vocal group who performed to over 55,000 people on their sell out UK tour last year, start new tour for 2016 playing the Brighton Centre on Saturday. March 12!

Since winning Britain’s Got Talent, Collabro’s diary has been a whirlwind of touring and promotion on a Worldwide scale!  The new tour includes 29 dates across the UK, starting in the Wirral at New Brighton’s Floral Pavilion (February 23) taking in a date at London’s Royal Albert Hall on March 26 and then culminating on April 3 at Guildford’s G Live.

The five-piece vocal group swept to victory on the ITV’s Britain’s Got Talent in June 2014 winning a £250,000 cash prize as well as a much-coveted slot on The Royal Variety Show.  They signed with Simon Cowell’s Syco Music and their career has gone from strength to strength here in the UK and Internationally.

Their debut album Stars rocketed to the No.1 spot beating Ed Sheeran in the process and remains the fastest selling album for a debut act.  A Christmas released special edition of Stars followed to further their domination of the album charts.  A sell out 32-date UK tour in 2015 saw the band play in prestigious venues such as The London Palladium.

In June 2015 their second album Act Two was released, charting at No.2 beaten only by Florence & The Machine.  In just one year the band have gone from being completely unknown to selling over 300,000 albums, making them platinum album recording artists!

Collabro collectively are Michael Auger, Richard Hadfield, Jamie Lambert, Matt Pagan and Thomas Redgrave who first got together upstairs at a north London pub, having come together through mutual friends and social media.

Less than five months after meeting for the first time, Collabro won Britain’s Got Talent and the rest, as they say, is history.

Local boy Richard Hadfield, hails from Portslade in Sussex and is looking forward to another successful UK tour and the band’s second trip to America to perform for their USA fans with three dates across the east coast. As a swing busker in Brighton, Richard could never have believed that just that 2 years later he would be selling out the Royal Albert Hall as part of Collabro.

Since being launched into the spot light, avid rugby supporter Richard has been lucky enough to meet his idle Jonny Wilkinson whilst duetting with his favourite Van Jean of all time, Alfie Boe, at Wilkinson’s celebratory testimonial, which he says was his Highlight of the year. Not only has Richard been able to sing for the England rugby team, he also took part in Rugby Aid at Twickenham this year along side other celebs and ex pros. This was s real treat as he got to tackle Mike Tindall and other childhood heroes.