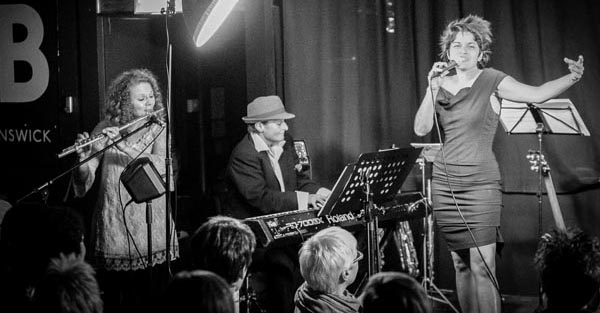 Bliss Art have quite a following on the festival circuit both at home and abroad.

The three songwriters love taking themes that take their fans on a whirlwind of emotions, not holding back from the highs and lows in the stories the songs tell.

Mojca’s ability to create different sound textures and an enchanting atmosphere with her fingers and body movements is in itself a creation of a master piece. Her self penned song On The Edge is bitter-sweet with a conversation about life and death with a GP and her song Gypsy Woman is dedicated with a wink in her eye To All The Women In My Life. Her piano playing is flawless, powerful and leaves its imprints on you.  She is a virtuoso in her own right.

Jana Cadez Amali’s breathes love for the flute which dances from her fingers and enables her to makes the most enticing sounds from it. She also plays the bansuri in the band’s much loved cover song Tera Chera. When the band play this song, the room stops breathing, “afraid to miss even a second of the moment they are in”. She bends the notes bringing fully to life the indian instrument. Her original songs are compelling and deep. The rhythms and melodies in You, Hold On and Tango Crush carry the lyrics like a bird on a flight with every ounce of it’s heart.

Aneesa Chaudhry is a vocalist with a rare quality that is worth coming out to listen to. She brushes off her ability to swoop from the ethereal high to a low timbre of low that few women can reach. Her original songs Guappa Chica, Sappho’s Bossom and Letting Go are fun and full of vocal improvisation and vocal percussion.

Bliss Arts’s eastern flavours includes both the Asian element and the Eastern European element, gyspy sounds, ‘melos’ as described by the Slovenian members. They perform songs in Slovenian which Chaudhry loves trying to get her tongue around. She is always ready for a proper vocal work out to get her lips and tongue moving around the vowel-less words! “Crazy fun!” she says.

The band have produced several albums, On The Edge and Hold On and on April 26, at The Brunswick, Brighton they will be performing some favourites but also new numbers to keep everyone on their toes. As always they will lave their leave audience wanting more!