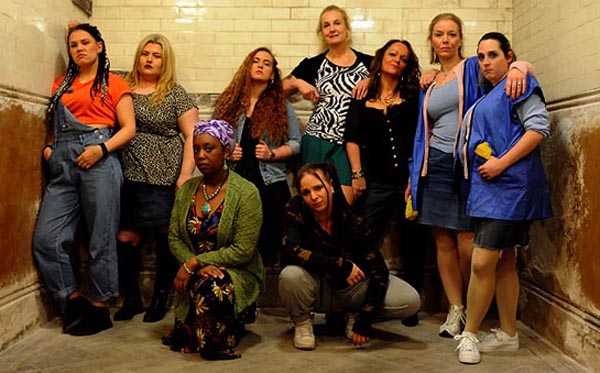 With the local prison service currently in something of a state of turmoil, the timing of the staging of Bad Girls – The Musical at The Old Market Theatre (TOM) in Hove, couldn’t be better.

With a highly talented local cast from Brighton Theatre Group, the musical that ran for over a year in the West End recently, takes as its starting point the original core characters from the first three series of Bad Girls the iconic TV series.

Set in the fictional HMP Larkhall, it tells the story of new idealistic Wing Governor Helen Stewart (Collette Ridehalgh) and her battles with the entrenched old guard of Officer Jim Fenner (Frankie Davison) and his sidekick Sylvia Hollamby (Sharon Starr).

The tragic death on the wing of Rachel Hicks (Amy Lawrence) – in which Jim Fenner is implicated – leads to an angry protest from the women and forces Helen and Nikki to their opposite sides of the bars. But when it’s clear that Helen stands to lose her job over Jim Fenner’s misdeeds, the race is on for the women to nail Jim once and for all.

With a musical score performed by a live band hidden away in the depths of the theatre and with direct input from Kath Gotts, writer of both the score and lyrics, Bad Girls – The Musical is packed full of catchy tunes such as A Life of Grime; All Banged Up & The Future is Bright), plus a ballad or two that will bring a tear to your eye including the evocative Freedom Road.

The show is directed by Michael Burnie, choreographed by Jodie Michelle with musical direction by Ellen Campbell.

Bad Girls – The Musical promises to be gritty, witty and wonderful as “THESE GIRLS AREN’T JUST BAD – THEY’RE WICKED”.

Where: The Old Market Theatre, 11A Upper Market St, Brighton BN3 1AS