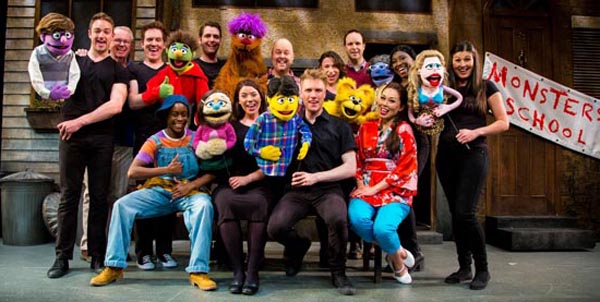 You’d be a muppet to miss this Tony award-winning Broadway and West End musical!

A smash hit on Broadway and in the West End, award-winning comedy musical Avenue Q will bring a host of fuzzy friends to Congress Theatre, Eastbourne from Tuesday July 5 – Saturday, July 9 2016.

Featuring the naughtiest puppets in town, brought to life by an ensemble cast of 11 performers, Avenue Q is a Tony Award-winning musical about growing up, dreaming big, and finding your purpose in life.

Meet Princeton, a bright-eyed graduate who comes to New York City with big dreams and a tiny bank account. Soon discovering that the only neighbourhood in his price range is Avenue Q, he finds himself moving in with some truly quirky characters.

Avenue Q first opened Off-Broadway at the Vineyard Theatre in 2003, before transferring to Broadway later that year where it won three Tony Awards for Best Musical, Best Score and Best Book.

In 2006 it transferred to the West End produced by Cameron Mackintosh, where it ran for five years before touring the UK. It has appeared in more than ten countries all over the world.

Avenue Q is co-created by Tony, Grammy and Emmy Award-winner Robert Lopez, who also co-created The Book of Mormon. Robert also co-wrote the songs for Disney’s Frozen and has worked on TV shows Scrubs, The Simpsons and Southpark.

When: Tuesday July 5 to Saturday July 9