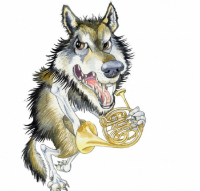 Peter and the Wolf

Chamberhouse Winds are a fun local group of professional orchestral players with a nice line in millinery who also know how to engage and hold the attention of young children for an hour or so and provide an entertaining and unusual performance for their parents too.  This ability to hold the attention of children is an astonishing skill and allowed the children to experience a professional classical concert, albeit a brief one, for the first time.  This was Prokovief‘s intention when he wrote Peter and The Wolf for the Central Children’s Theatre in Moscow in the 1930’s.

We went along with Little Miss Tilly, who is three and not always happy to sit still for more than a few minutes but enjoys dancing around to light classics on Radio 3 and here she was transfixed from the opening moment, both with the instruments which are skilfully introduced with informative humour to the children, and also by the eccentric performers themselves, and -of course- their great hats.  The recommend minimum age was five but there were some younger children there  and they seemed ok with the set up.  The hats, like the instruments represent different animals and this allowed the children to make the connection repeatedly between the musical motives and the story.

Narrator Jonathan Butcher introduced us to Prokofiev’s classic composition and the wind family of instruments and was charming and interesting, giving the children time to grasp the ideas he was presenting and getting them involved in all the right places, keeping their attention and enthusiasm focused throughout.  There were some cool illustrations being projected on the backdrop to further illustrate the story too, which elicited many ‘boos’ from the audience whenever the Wolf appeared.

There was an opportunity for children to chat with the musicians afterwards which was mobbed and they also allowed the children to have a go on the instruments which I thought was very impressive, almost as popular as the ice cream lady who could have done with a slot of her own too.

Great fun and an accomplished musical performance too.

For more information about the Chamberhouse Wind Group, click here: