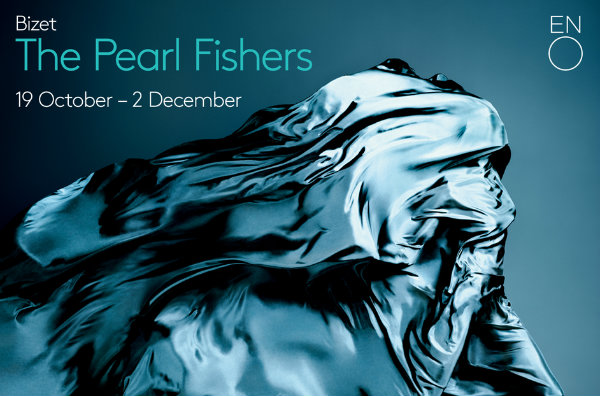 The Pearl Fishers by Georges Bizet

This vibrant (second) revival with Roland Boer at the helm of the orchestra opens with some delightfull aerialists who convince us of their diving through water from the top to the bottom of the huge Coliseum stage to search for pearls, this is a triumph of theatrical illusion from 59 Productions and supports the musical introduction to the emotional palate of Bizet’s work. The dappled light, projected bubbles and skill of the wire performers combines into a dream like staging that was very impressive, extraordinary and magical. My companion was captivated from the off.

Claudia Boyle’s voice is clear and strong and as Ieila she has a purity which enables her to effortlessly master some of Bizet more rapid demands. Her acting has a tremulous hesitancy which convinces of her faith as a priestess with the strength of passion in her voice.  Robert McPherson’s Nadir is fantastic, his rich fresh tones expanding into the higher reaches and filling the ENO space and finding macho charm and physical grace in the careful faithfully clunky libretto from Martin Fitzpatrick, his voice is thrilling and the audience adored him. Jacques Imbralio’s debut at  the ENO as Zurga was good, changing with conviction from power to despair, from anger to love and his voice allowing the whole breadth of emotional to bear witness, although markedly weaker than Fitzzpatrick when they sang together.   James Creswell as Nourabad was substantial and threatening and his voice carried the wrath and ferocity of judgmental piety well. His is an outstanding voice for a supporting part.

The Pearl Fishers is a compelling tale of friendship tested by love. A tragic love triangle lies at the heart of the story, which explores themes of desire and rejection, longing and loss, and living within religious strictures.

Penny Woolcock has brought us an visual interesting Pearl Fishers of that there’s no doubt and conductor Roland Boer whipped the orchestra into a fury of musical sensation and colourfully energetic presentation of these musical contrasts. The storm scene, pivotal in the plot seemed sadly lacking as a stage event though the chorus and musicians gave their all, the billowing black silk sheets, so skilfully used for the arrival of Leila on a boat at night, seemed unreal when representing the crashing, overwhelming seas.

There were some great magical moments from the digital  background and aerialist work, combining with the acting singing and projections were transporting and magical to behold, it was lovely to see the whole complex combination of scenery, effects, cast and music combine with such grace.  The scene changes, which took a few minutes,  were covered with full curtain projections of stormy seas, the desolate ruins of flooded cites and villas and the faint shhhh, shhhh of the sea.

The Chorus, as usual in the ENO grab the better bits of Bizet by the throat and give it a purity of rendition that is utterly fabulous and although they don’t get up to much high jinks and the group acting is more W.I than Indian village their simple projection of mob emotions, adoration, hope, furious rage then fear is wonderful and I was delighted by them.  The ENO chorus is a joy to behold, they bloody rocked last night with a few extra voices than usual thrown into the mix.

This is a production with stunning set pieces, great voices and a fabulously wired chorus who are kept oddly physically static. Like the Storm in this production, it washed over me, was enjoyable and nice to hear but didn’t leave me beached, panting at the overwhelming thrill of the night, most of the blame for this lack is Bizet’s though as his characters simply don’t connect no matter how fine the singing.  I’m a snob though; you as a lovely member of the audience keen for a good night out with some beautiful singing and breath-taking theatricals will love it!

If you’re a fan of Bizet’s rich and Rubanesque style then get along and see this production as visually it’s a feast. Over simplified for the purist perhaps, this would also be an easy and assessable opera for the first time visitor, as the clear narrative force supported by the perfectly executed flight of on stage fantasy makes this a very easy to understand production.

The ENO has more than 500 tickets at £20 or under for each performance and with an easy jump up on the train to The London Coliseum this is the perfect autumnal eventing out.