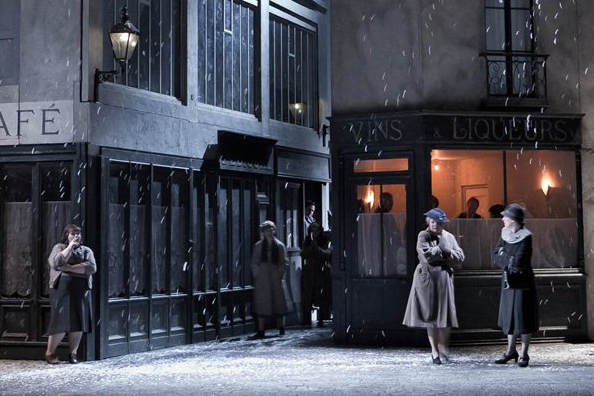 WHEN Mimi knocks at the door of four impoverished friends, Rodolfo answers and its love at first sight. Conducted by Alexander Joel, Puccini‘s moving score follows Mimi and Rodolfo’s love unfolding from its joyful beginnings to the heartbreak of her death.

Bringing back Jonathan Millers’ 1930s Paris-set adaption of La Boheme to celebrate the 40th anniversary of the director’s ENO debut is a pretty shrewd move from the ENO, guaranteeing an audience for this perfectly presented production, although it’s a loss to those of us who enjoyed the bold, refreshing strokes of Benedict Andrews 2015 version.

But there we are, and here we are with this, a tone perfect, rather superbly polished piece of Miller’s repertoire, done with a couple of tweaks which bring it up to a sheen of brilliance. Always a good production the addition of these superb singers and a slight adjustment to the focus of the narrative gives us a La bohème to sigh over.

This is its fourth revival and revival director Natascha Metherell has given us something rather special.

Isabelle Bywater’s sets split and turn to take us up in the attics and studios and down in the streets and inside the restaurant, are atmospheric and work extremely well. The lighting added to the subdued ambience and the dusted down tones of the costumes give this a cinematic feel and the care and detail of the costume only adds to the allure of this production

Jonathan Tetelman’s Rodolfo is believable as the love struck lad about town and works well with Welsh singer Natalya Romaniw‘s perfectly realised Mimi, whose full warm soprano raised hairs on my arms and was utterly convincing in her acting. Her clarity of phrasing was outstanding. They are a gorgeous couple and although their rather hasty decent into love strains credulity, who cares when it’s this lush, lyrical and so perfectly sung. Puccini certainly knew how to consciously speed couple.

And then we come to Musette brought to stunning effervescent life by Nadine Benjamin who we adored in Porgy and Bess a few weeks previously, she possessed the stage and us and gave as a fully rounded Musette as tender as she was brassy, as gentle and as furious as possible, he voice commanded us to attend her.

Marcello, Colline and Schaunard all feel full realised from Nicholas Lester’s David Soar’s and Božidar Smiljanic’s respectively and each gives us an a tangible insight into the bromance which weaves these four together, charming and naive they come across as hapless with the women they experience, love and adore. Baritone Lester was particularly good, his sonorous tones rolling around the space.

All this lush production and perfect singing is underscoring by Amanda Holden’s delicious and waspish translation which gives us authentic conversation and reflection from the singers and brought a lot of laughter from the packed auditorium. Holden rhymes with relish and it’s a joy to listen to this because of her well-balanced nuanced wit brought out perfectly by Simon Butteriss’s Benoít.

The orchestra swooned under the baton of conductor Alexander Joe who lead us though a superb rendition of Puccini’s score, bringing forth all the tenderness, emotive froth and stunning waves of emotion which rock this piece so rigorously. They were thunderously good and on occasion over powered the singers on stage, but as I was being carried along on the surging tide of emotion produced by them it’s a slight criticism of a rather good evenings playing. As I drifted off into a reverie while Mini gently expired on stage I looked across and saw half the row silently weeping, tears glistening in the darkness of the Coliseum auditorium like the frosted snowflakes of the striking act III quartet.

The end, swift, inevitable and so terribly comes as it must and leaves everyone awkward, struggling with the death of Mimi, filled with regret and angst but my mind turned to Musetta, the only one who really shows any agency in this narrative, who really cares for Mimi, who looks out for her, who looked truly heartbroken at her loss. The men just seemed to mourn the loss of a potential conquest and seem unable to process the emotional impact of what they’ve observed and perhaps this is the real triumph of this production. To bring a focus not only to Mini and Musetta, but also the men’s inability to deal with them as equals. It’s pure understated glory is a wonderfully released production of Puccini.

A beautiful, thrilling, emotionally convincing evening in the presence of a splendid cast, and tremendous music, the ENO at its best. Tickets start from £12 and this is the perfect opera for anyone who’s not been before.