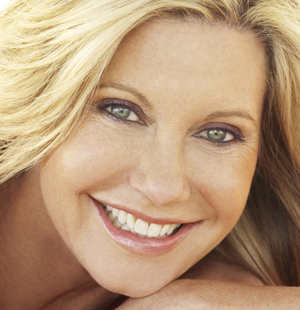 The original Australian sweetheart, Olivia Newton-John, wove a place where everyone dared to go at a timeless show brimming with unabashed confidence at The Brighton Centre.

With a discography as long as her teeth, “If I sang every song I’ve ever did, we’d be here for hours!”, the sexagenarian crammed in everything bar a pocket-sized pop-up mariachi band during the just shy of two hour show.

Decked in a ‘casual’ black trouser suit with obligatory ‘just finished work’ unknotted tie, ONJ opened with Pearls on a Chain, a rather tepid ballad, which while perhaps not a colossal opener, nevertheless showcased her honey-soaked chest tones.

Moving to the mid-tempo was the coy chamber-pop of 1975’s Have You Never Been Mellow?, which countered the honey-tones with ONJ’s undiminished clarity in the upper register; however the tremulous purity and sheer power of this, one of her trump cards, would be explored later.

While Mellow registers on the ONJ roster of hits, the show really began with ONJ powering her way through the addictive-like-pop strut of A Little More Love,a slinky smash hit from 1978, which saw Olivia put down the hoe and capitalise on Sandy from Grease’s transformation into leather-clad hot stuff. It was a much welcome change of gear, and saw ONJ teetering on the verge of vocal recklessness during its walloping chorus!

Testament to her staying power, and adoration, fans dressed in Pink Lady and T-Bird garb, held fairy-lights aloft, while one or two of the most ardent laid bouquets of flowers and chocolates, not onto the floor, but into ONJ’s arms, quite unlike other superstars, whose fans would be greeted by hurly bouncers and Alcatraz-style fences…

Fans hit the roof with the proclamation, “I’m going to do a few songs from a film I was once in. I danced with Gene Kelly.” Not John Travolta? Instead, it was time to be transported to Xanadu, conjured up by the rumble of keyboards for the shimmering title track, complete with ‘that’ crescendo, all in tact. Magic, with its woozy sax still shuffled in the stratosphere; and Suddenly, still a triple-cheese feast, was not good for the cholesterol.

Before her career veered into leg warmers and a steroid-induced exercise regime, ONJ was a country bumpkin, a girl whose only encounter with spray was from her father’s weed killer. Early hits, the morbid murder ballad Banks of the Ohio, with its bassy backing vocals complementing ONJ’s soprano, and Take My Home Country Roads, which still retained the glazed-eyed wistfulness as it did back in the 70s, were performed alongside a vocal trio with the band stripped back to its bar acoustics.

A love of nature, in particular trees, formed the best part of the repartee between the singer and the audience, and she even gave a nod to Brighton with Long Live Love (4th at the 1974 Eurovision Song Contest in Brighton) a pompous ditty with a tip of the hat to the “Sally Annie band”.

Physical started as a chanteuse number. Disappointing perhaps, until she herself said, “I’d much prefer to do it the old way”, a comment committing the 64-year-old into letting her body talk through the mandatory bunny-hopping, acrobatic lunges and bum-crunching squats, all of which served as a warm-up to some musical called Grease with a sassy You’re The One That I Want, and a syrupy Hopelessly Devoted To You, complete with a killer finale.

After some chang chang chang-it-ty chang shoo-bop, the audience were doused in the buttery warmth of I Honesty Love You, with the lyrics “I’m not trying to make you feel uncomfortable”, belying how at ease she makes you feel.