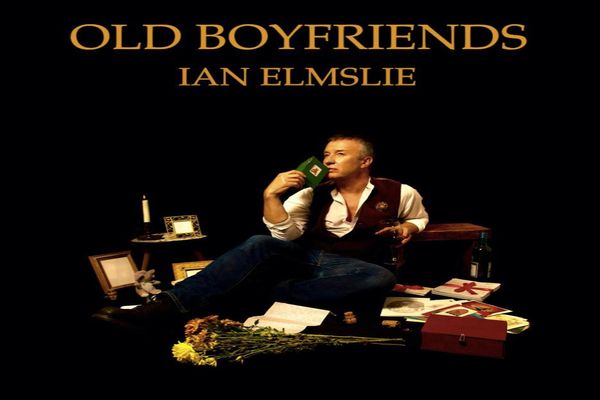 Ian Elmslie is a cabaret performer and author. We caught up with him last year to discuss his 2017 memoir, I Went To A Marvellous Party. We discussed his support for GMFA and the accompanying single, “I Miss Him”. The song raised £560 in one day. We also discussed life in lockdown and how to stay productive during the pandemic. Ian has clearly been keeping busy since we last spoke.

“Old Boyfriends – The Soho Session” is the first of two debut albums he’s about to release. The album is comprised of eleven original compositions, all of which were performed live in a studio over a rainy November.

Ian says: “I wanted to capture the songs as they were written, raw and unembellished by arrangements, to let the stories within the songs come right to the fore. Each song recalls a past relationship, detailing the occasionally mixed emotions within the memory and what I hopefully learned from the experience. The subject matter ranges from the beautiful naivety of first romance, through the less pleasant experiences of dating fantasists, alcoholics and married men, the inevitable heartbreak and the pain of loss, and the relief and joy in finding life after love.”

His latest single Prisoner of Love is a brilliant mix of cabaret and country. The lyrics could have been written by Dolly Parton and then rehashed by Noel Coward. The Prisoner of Love is an actual prisoner who’s done time in various jails. The song is sung by the longing lover waiting for their Prisoner of Love to be released, but the unfortunate crook keeps reoffending and getting banged up again. It’s very camp and very funny. Ian has a distinctive turn of phrase.

Ian said: “The musical styles range from jazz to easy listening, vaudeville, Irish ballad, country and western, musical theatre, ballroom and disco…so, hopefully, something for everyone! I wanted each song to be as individual as each of the men about whom I’m singing, as if you were flipping through a photo album, or wandering round the art gallery of your life. Whilst the material may be rooted in failed relationships, there is plenty of humour to be found…believe me, when writing about dating someone residing at Her Majesty’s Pleasure, you have to find the funny side!”

You could imagine the songs being performed in a cabaret bar to great effect. The theatricality of the songwriting is quite brilliant. One day, when live music returns, this will be a gig you won’t want to miss.

Ian concludes “I know it is utterly absurd to be releasing a first album at 58, but it has taken me this long in life to “research” and write the songs, which I hope both amuse and resonate with the listener.”

“And why should only women make a break-up album? Think of this collection as a gay man’s “Blue”, “Back to Black” and “21”, only a hell of a lot more camp!”

The Soho Session album will be released, very appropriately, on Valentine’s Day, and will be available to stream and download on Spotify, Amazon Music and Apple iTunes.

Both of Ian’s singles are also available on Spotify.